In 1997, Kern competed in the quadrennial competition as a brunette named Olga Pushechnikova (her maiden name) and didn't make it past the preliminary round of the 10th Cliburn. But in 2001, at age 26, she took the competition by storm, walking away with the first gold medal awarded to a woman since 1969. 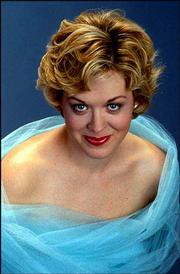 Now the charismatic blonde is in the midst of two years of international concert engagements. Her tour will bring her to the Lied Center at 7:30 p.m. Thursday.

Kern will speak through a Russian interpreter on Wednesday in the Spencer Museum of Art's central court during an hour-long Listening Room event called "Rachmaninoff and Me." She will reflect on the composer, his music and their families' associations.

Kern was born into a family of musicians -- her great-great-grandmother was a friend of Tchaikovsky's -- and began studying piano at age 5. She is a laureate of several international competitions, including the Hamamatsu, Ciani and China competitions, and has toured throughout Russia, Europe, the United States, Japan, South Africa and South Korea.

She has performed in many of the world's most important venues, including the Great Hall of the Moscow Conservatory, Symphony Hall in Osaka, Japan; La Scala in Milan and the Salle Cortot in Paris.

Kern made her Boston Pops debut in the summer of 2001 on the coattails of her Cliburn success. She also was featured in a documentary about the 11th Cliburn Competition, directed by Emmy-award winner Peter Rosen, which premiered in October 2001 on PBS stations.

She is a postgraduate student at the Moscow Tchaikovsky Conservatory and the Academia Pianistica Incontri col Maestro in Imola, Italy, where she studies with Boris Petrushansky.

She has one son.