The saddest part? This could've been a pretty good fighter with some very minor tweaks.

I'll admit, I had high hopes for this game. John Tobias, co-creator of Mortal Kombat, was contracted by Bill Gates 'R Us to make its superior competitor. But the features that could've been groundbreaking become mere novelties in the reality of a poor camera system and cheap artificial intelligence. 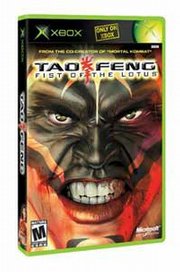 He's as frustrated as I am.

Two gangs of six want each other's half of the yin-yang tablet to complete their spirits or whatever. It doesn't really matter. The attempt at this oriental folklore comes across as an overused gimmick to try to capture that odd magic the original Mortal Kombat had. No dice.

There are 12 fighters and three more hidden. There is no arcade mode, but rather a versus and "quest" mode where you must defeat the six fighters from the other gang, with each of your gang's six. Yay. You get two punch buttons, two kick buttons, one taunt button, a special move button and an evade/use pole button.

The most hyped part of the game was the limb damage system. If you hit someone in the arm too much, it will receive "limb damage" which renders the fighter's attacks 50% less powerful. The fun factor of this option hits you like a feather. After you "break" your first opponent's arm or leg, the idle animations show the fighter favoring the arm or slightly limping, but when they attack it's as if nothing changed. They aren't on the defensive more at all. In fact, they are more aggressive when the limbs get damaged. Plus, sometimes you break a right arm or left arm, depending on which one you keep hitting. The only problem is, you can't target the right or left arm/leg. So the CPU has to decide which to attribute damage to. Regardless, the "limb damage" system could've been groundbreaking, but ends up as a pure novelty.

The training mode is pure disappointment. In normal training modes, it will give you the move to do and show how to do it. After you successfully complete the move, it will switch automatically to the next move to accomplish. Not so in Tao Feng. Once you complete the move, there is no indication that you did it correctly. In fact, when you do it right, you have to manually change the move you are trying to accomplish by going to the moves list in the pause menu to change it. How ridiculous.

There are a variety of moves to do, but you can only perform special moves when your "Chi" meter is full. It gets full by you doing well in the fight. When it's full, the moves are easily done by pressing the white button. Your second and third special move can be performed by pressing back and white or forward and white together. This gives the gamer no sense of accomplishment. Also, it takes your whole Chi meter to do one move.

The combo system feels more free than other fighters, but lacks in the amount of moves available. Sadly, Mortal Kombat 5 had better depth. It took me about 10 minutes per fighter to master all I could versus a few days with gems such as Tekken or Soul Calibur.

You press back to block, which, annoyingly, hardly ever works. If the CPU decides it's going to hit you and start a big combo, it doesn't matter how you block; you will get thrashed. To add to the frustration, when you are pressing back to back away, the camera will arbitrarily change 180 degrees, so now you are moving forward, straight into the fist of your opponent, most likely losing much of your health from an unbreakable, un-counterable combo.

Moving up or down takes way too long to accomplish for a 3-D fighter wanting to be taken seriously. To do this, you have to press back or forward for almost one second, then ease into up or down. You can't move 3-D immediately. By the time you get to move into the foreground or background, your strategy is foiled because either 1) your opponent has moved 2) your opponent started a cheap combo or 3) you have accidentally jumped or crouched. Yuk.

Let's get to the good. The game is gorgeous. The character models are clean, detailed and their animations are fluid. Tao Feng is a joy to watch. Bruises appear where the fighter gets hit or kicked. Blood starts to pour eventually. Floors crack and shatter if you fall hard. Windows and statues break if you are slammed into them. The environments are more interactive than any other fighting game. A fantastic visual presentation.

The graphics are stunning. The camera is not.

You can press the right trigger to flip attack off walls when you are cornered or swing off of pole-like objects to attack with greater force. It's a nice option, but happens not often enough to mention as a major part of the game.

The sound is suitable and sometimes the whizzing of kicks and punches gets repetitive. I don't understand how hard it is to vary it up more than this. The soundtrack is generically oriental. Nothing melodic stands out, but it all gets the job done.

Overall, I found myself having a fairly good time every fourth time I played it. The other 75% of the time I spent in anger of cheap combos and a camera system that totally destroys gameplay. The saddest part? This could've been a pretty good fighter with some very minor tweaks.