New York — Her bullet-deflecting bracelets are gone, her golden tiara has disappeared, and her long, flowing locks have been shorn.

After 60 years of fighting evil, Wonder Woman has a new, edgy look, complete with short, spiky hair and a camouflage bustier. The new Wonder Woman will appear in the DC Comics issue that comes out today. 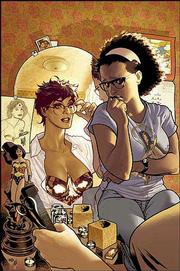 With a new short haircut and eyeglasses, Wonder Woman, left, suffering from amnesia, appears in the newest issue of the DC comic. The character on the right is Becca, a Wonder Woman fan.

With characteristic finesse, a somewhat shocked Wonder Woman looks in the mirror and takes her new 'do in stride: "It's hair. It will grow back."

The makeover is part of Wonder Woman's latest six-part adventure, a harrowing scenario in which she gets amnesia and must fight demons without her superpower strength.

In Issue 190, Wonder Woman decides she must go undercover if she is to survive her ordeal and reclaim her identity.

"She's bright and when she realizes she's getting attacked she thinks she probably ought not to look like herself," said Wonder Woman writer Walter Simonson of DC Comics. Simonson expects readers to have mixed reactions to the new look.

To foil her enemies, a slight trim won't do. So, Wonder Woman chops her hair, dons a pair of glasses (a nod to Clark Kent and his superhero alter ego Superman) and trades in her star-spangled leotard for the camouflage bustier.

"In this series, she has plenty of battles, and she looks like a soldier," said illustrator Jerry Ordway. "Here we have someone who is a fighting machine. She's suddenly put in a situation and she can handle herself."