Philadelphia — The post-World War II optimism that pervaded the nation extended to the not-too-distant future, with its promise of spaceship-traveled skyways whirring in a utopia of streamlined cityscapes.

Now, the works of A.C. Radebaugh -- a top illustrator of the day whose works helped define that future-vision -- are being shown in a retrospective at a quirky art gallery obsessed with Americana of the mid-20th century. 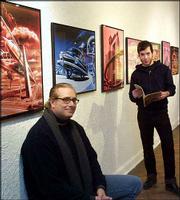 Todd Kimmell, left, director the Lost Highways Archive & Research Library, and curator Jared Rosenbaum pose in the Philadelphia gallery with some works by the futuristic illustrator A.C. Radebaugh. The exhibit "Radebaugh: The Future We Were Promised" will run at the gallery until August.

"Radebaugh: The Future We Were Promised" is the latest exhibit from Lost Highways Archive & Research Library, an art gallery and repository of advertising materials, brochures, books and ephemera borne from Todd Kimmell's love of vintage travel trailers and recreational vehicles. Recent exhibits include 1950s and 1960s station wagon design and the RV craze of the 1920s and 1930s.

The 16 Radebaugh images in the show, on view until August, were discovered among some 14,000 negatives -- from burlesque photos to advertisements -- that Kimmell, Lost Highways' founder and director, acquired several years back from a Philadelphia commercial photographer who was retiring.

By the time curator Jared Rosenbaum came across the startling images last year, the elderly photographer had died. The images apparently had been shot from Radebaugh's portfolio in the mid-1950s, and the story behind the slides, and what happened to the originals, remains as much a mystery as Radebaugh himself.

"He's beloved by some automotive folks, by some sci-fi folks, but there's not a lot of information out there about him," Kimmell said.

Little is known about Radebaugh until around 1935, when the then 29-year-old seems to have "burst upon the illustration world fully formed," Kimmell said. Suddenly, his work was everywhere: The Saturday Evening Post, Fortune and Motor magazines; ads for Dodge and Coca-Cola.

"Art Radebaugh was very much an eccentric and very much a gentleman," said Jimmy Northmore, 76, a retired photographer who worked for years with Radebaugh at New Center Studios in Detroit. "He had all these ideas about futurism. ... He was so far above everybody, he was halfway off the ground."

A short, stocky man who wore a monocle, Radebaugh did his illustrations with an airbrush at a time when the device was used as merely a touchup tool. He created a black-light airbrushed scene of Rio de Janeiro at night -- complete with a real-life balcony and awning -- on one of his studio walls, Northmore recalled.

Radebaugh's illustration career dried up in the mid-'50s, when photography usurped illustration's dominance in advertising. He developed a syndicated comic strip in the late '50s called "Closer Than We Think." It was a campier look at the future with jet-pack outfitted letter carriers amid Jetsons-style suburbia.

As the euphoria for "gee-whiz" spacescapes gave way to the real-life space travel of the 1960s, Radebaugh found himself out of work and forced to take factory jobs.

He died in 1974, embittered and estranged from his relatives, said Kimmell, who interviewed Radebaugh's family during his research.

Northmore is optimistic that the rediscovery of Radebaugh's work in a Philadelphia photographer's studio could spur an interest that will lead to the discovery of more work hidden away in some forgotten old warehouse.

"He did thousands of illustrations, some of them that were literally thrown in the Dumpster," Northmore said. "But there must be others out there waiting to be found.