Amsterdam, Netherlands — If Vincent van Gogh were alive for his 150th birthday celebration today, he probably wouldn't know if he should laugh or cry.

Though he sold only one painting in his lifetime, thousands of Van Gogh's fans are expected to flood the Dutch museum dedicated to his now priceless work. 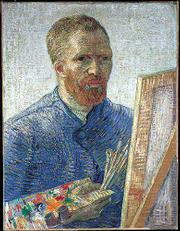 Van Gogh painted this portrait of himself in 1888, mimicking an earlier portrait by another Dutchman, Rembrandt van Rijn. The painting is part of the collection of the Van Gogh Museum in Amsterdam.

Special buses adorned with images of his paintings will take tourists to the Van Gogh Museum, where they will enjoy free entry and birthday cake. A new five euro coin, bearing van Gogh's portrait, will be unveiled and visitors can compete for the best drawn birthday card.

The museum attracts more than 1 million people each year.

Although he is known for expressive, emotional paintings such as "Starry Night," van Gogh is equally known for his tormented psyche, revealed in letters to his brother, Theo, and others.

Van Gogh once wrote, "I would like to paint in such a way that everybody, at least if they have eyes, would see it."

Almost a century later, a van Gogh painting of a vase of sunflowers electrified the art world when it was auctioned for $39.5 million, smashing previous records. In 1990, a Japanese collector purchased the artist's "Portrait of Dr. Gachet" for $82.5 million, which remains the highest price ever paid for a piece of art.

"He said he wanted to paint pictures people would go on looking at for a long time," says Judy Sund, a van Gogh scholar at the City University of New York. "It's a weird fulfillment of that fantasy."