By By Monica White, Special to the Journal-World

Modern dance legend Twyla Tharp has spent her five-decade career setting innovative choreography to provocative pieces of music by everyone from Beethoven to the Beach Boys.

Tharp, an acclaimed dancer, director and choreographer, will travel to Lawrence with her company, Twyla Tharp Dance, to perform at 7:30 p.m. Saturday at the Lied Center. 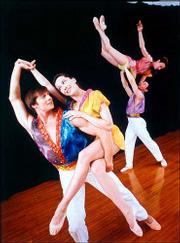 Twyla Tharp Dance, the company named after the modern dance legend, will perform at 7:30 p.m. Saturday at the Lied Center.

Joan Stone, dance professor at Kansas University, said the gifted troupe and Tharp's postmodern choreography will keep audience members on the edge of their seats.

"Twyla has a young and dynamic company. It's very fast, very athletic and very challenging for the dancers," Stone said. "She's sometimes witty and funny, but always intense and exciting."

Stone, who has not yet seen the new company, said Tharp didn't travel to many places, making her Lawrence visit "a special event."

Tharp has worked with music ranging from classical to country western, and has even set dances to tunes by popular bands like Talking Heads.

"She uses a variety of ingredients," Stone said. "That's part of postmodernism -- anything goes."

Tharp regrouped her company in 1999 to regain creative control. The original company, created by Tharp in 1965, performed pieces from her repertoire until 1988, when she merged the company with American Ballet Theatre amid reports of financial and administrative trouble.

Since regrouping, Tharp's dancers have toured internationally to critical acclaim. On Saturday, they will perform "Surfer at the River Styx," "Westerly Round" and "Even the King," a new work by Tharp.

Tharp also will hold a workshop with KU student choreographers during her stay.


Since graduating from Barnard College in 1963, Tharp has balanced careers in dance, stage work and film and television. She has created more than 125 dances, choreographed five Hollywood movies, choreographed and directed two Broadway shows, written an autobiography and received two Emmy Awards, 17 honorary doctorates and numerous grants, including the John D. and Catherine T. MacArthur Fellowship.

Even after decades, critics say she has retained energy and creative dedication to her work.

"Oh yes, Twyla will be dancing to the end," Stone said.