Sisters pull clues from 'Dog in the Picture'

Nowadays, we call them man's best friend. We buy them sweaters and fancy collars. Some pups even score visits to doggy spas or pet psychics.

What surprised Lawrence historian and freelance writer Barbara Brackman and her sister Jane Brackman of Pasadena, Calif., is that contemporary America's love for mutts is nothing new. 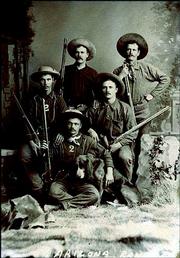 This 19th-century photo of men with a hunting dog is one of about 100 that Barbara and Jane Brackman include in their book, "The Dog in the Picture." The sisters will give a talk about dogs and the dogs' mysterious ways on Thursday at the Lawrence Pubic Library, 707 Vt.

In their recent book, "The Dog in the Picture," the Brackmans chronicle the domesticated dog's status in the human world during the Victorian era through World War II.

"Even though we don't think of the 19th century as a century when people had pet dogs, what we found as we looked at old photographs at swap meets and garage sales was that the dog frequently appears in the picture," Jane Brackman said. "In addition to that, we found old letters and journals and diary excerpts of people talking about their dogs. What surprised us was the way people interacted with their dogs in the Victorian era was very similar to what we do today."

The Brackmans will share their discoveries at a 7 p.m. talk on Thursday at the Lawrence Public Library, 707 Vt. During "Why Dogs Wag their Tails and Other Canine Mysteries Revealed," Barbara Brackman will give an overview of the book and how it came to be written, and Jane Brackman, a leading expert on the history of dogs, will make connections between the dog-human relationship and the science and evolution of dogs.

The book contains more than 100 photographs, as well as comments from old letters and diaries. The collection paints a telling picture.

"There's something about the dog in the picture that draws you into a Victorian photograph," Jane Brackman said. "If you just look at people, they have sort of a stilted feeling. We found that when there was a dog in the picture, there was an immediate identification with those people. You feel like they're the same as us."

Collecting old photographs from around the world is a hobby the sisters share in common.

"We started out thinking, 'Gosh, there's a lot of dogs in these pictures,'" Barbara Brackman said. "I realized that they're telling you a lot about dogs, especially about the way dogs have changed, which is my sister's interest. She gets real into the genetics of it, but I'm interested in the sociology of it."

The Brackmans had a good chuckle when they came across an early 20th-century photo of an infant with a bulldog. The baby's back is facing the camera; the bulldog is the featured subject. The caption reads: "This is baby Inez Brinson and my bulldog Noodles. Will send front of baby later."

"Frequently you'll see photographs where people have written on the back of the photograph. Many times the description is about the dog and not the baby," Jane Brackman said. "It just means that there were some people that loved dogs as much as people love dogs now."


The degree of their affection can sometimes be measured by the type of photograph in which the dog appears, she said.

"If it's a formal studio shot, the photograph tells you how important the dog is because people actually brought the dog into the studio, had it sit with this formal portrait, which were very expensive at the time," she said.

"The Dog in the Picture" -- and the Brackmans' talk at the library -- will likely appeal to two audiences: dog lovers and history lovers, Brackman said.

"It's an American history book because it looks at culture through the eyes of our relationship with dogs," she said, noting that many variations and breeds of dogs are products of human invention. "Handmade objects are strewn all over the world, and when you look at that thing, it tells you a lot about the people who made it.

"I would guess that as people read this book what they say is 'They're just like me.' From my own personal view and from a social science point of view, our relationship with dogs reveals that we have a lot more in common than we do in difference."