Portland, Ore. — Twelve years ago, Marine sniper Anthony Swofford was in the middle of America's first war against Saddam Hussein. He stalked Iraqi soldiers, rejoiced as enemy shells exploded around him and opened his mouth to catch petroleum drops raining from oil wells torched by Saddam's men.

This was Swofford's element. It had been his dream ever since he was 14 and his mother ironed a Marine Corps patch onto his T-shirt. 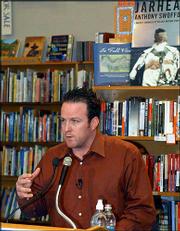 Anthony Swofford, author of "Jarhead," an autobiographical account of his time as a marine during the Gulf War, speaks at a book signing in Portland, Ore.

"Just before we engaged the Iraqis, I'd decided that I would soon die and this was OK," Swofford writes in his book, "Jarhead," a nickname for Marines because of their "high and tight" haircut.

Published earlier this month, Swofford's book began to attract attention as the Bush administration ratcheted up its preparations for once again going to war against Saddam.

Just before a recent reading at a bookstore in Portland, where Swofford has lived the past two years, he reflected on the strange trajectory of his life -- from a jarhead with a lust for combat's chaos to one of the most talked-about writers in the nation.

Swofford says he wrote the book as "an act of retrieval -- retrieving memory, but also attempting to understand who that 20-year-old Marine Swofford was."

A zealous warrior in the 1991 Gulf War, Swofford has no urge to be a part of the one now under way. He's a writer now, not a fighter.

"The everyday grungy life of a Marine Corps grunt is still somewhat appealing, but not the act of pulling the trigger, of being responsible for taking life," the 32-year-old Swofford says.

His book is more than a memoir. It is a powerful work of literature. Critics are calling it one of the best war books written.

"'Jarhead' is some kind of classic, a bracing memoir of the 1991 Persian Gulf War that will go down with the best books ever written about military life," Mark Bowden, author of "Blackhawk Down," wrote of Swofford's book in The Sunday New York Times Book Review.

In his book, Swofford provides a frank examination of warriors' training and behavior under fire by telling of his own.

Some of the scenes are reminiscent of "Full Metal Jacket," Stanley Kubrick's edgy film about Marines in the Vietnam War. But Swofford's book is more disturbing because what he describes -- and experienced -- is fact, not fiction.

Despairing over his girlfriend's infidelity and other troubles while in boot camp, Swofford places the muzzle of his M-16 in his mouth and contemplates what the bullet would do to his brain.

Perhaps the most unsettling scene describes another Marine's desecration of the body of an Iraqi soldier. The Marine used his E-tool -- a folding shovel -- to bash the corpse's skull and his fixed bayonet to slice the torso. Swofford puts a stop to this by covering the dead Iraqi with sand.

Swofford took an interest in the Marine Corps as a boy, while watching TV news broadcasts about the 1984 terrorist attack on a Marine barracks in Lebanon. The 14-year-old constantly thought of the Marines, and he came to the realization that he "needed someday to fight."

When Swofford was 17 and living with his parents in Sacramento, Calif., a Marine recruiter told him about prostitutes awaiting jarheads in foreign lands. The recruiter told Swofford something else he wanted to hear: "You'll be a fine killer."

Swofford was probably destined to join the military. The son of a Vietnam War veteran, he grew up on air bases in California, Ohio and Japan. His grandfather served in the Army Air Force during World War II and his uncle was in the Marines.

On Feb. 18, 1991, his sniper platoon was sent to a berm along the Saudi border with Kuwait. They came under fire from Iraqi artillery. Shells hit within 15 feet of Swofford's fighting hole.

"The rounds explode beautifully, and the desert opens like a flower, a flower of sand," he writes.

Hunkered down in his half-dug fighting hole, gas mask strapped over his face, Swofford begins to weep -- not out of fear, he writes, but "because I'm finally in combat."

In another desert scene, drops of oil are falling from the sky, coming from oil wells set afire by Iraqi soldiers as an act of sabotage. Swofford opens his mouth, catching the drops because he wants to "understand this viscous liquid."

"The crude tastes like the earth, like foul dirt, the dense core of something I'll never understand," he writes.

While in the desert, the young Marine had the following rumination: "If colonialism weren't out of style, I'm sure we'd take over the entire Middle East, not only safeguard the oil reserves, but take the oil reserves."

After Swofford's battalion enters Kuwait, shells fly over the heads of his team. He realizes that the shells are coming not from the enemy, but from American Abrams tanks. The shells hit three Marine trucks and a Humvee 100 yards behind him.

Swofford describes this tragedy -- which the Marines were told killed two soldiers and injured six -- as "more mysterious and thrilling and terrifying than taking fire from the enemy, because the enemy fire made sense but the friendly fire made no sense."

He also tells of the carnage left by American bombers that had pounded Iraqi troops in Kuwait before the ground campaign began.

Dead Iraqi soldiers sit around a campfire, their corpses burned and decaying. Swofford walks over to this "circle of the dead." One man is lacking his head. The Iraqis' boots are "cooked to their feet." Bugs are swarming. The soldiers' tin cups are lying around.

Swofford feels a need to speak to these rotting remnants of his enemy, to enter the realm of the dead.

"I could bend at the waist, close my eyes, and try to join these men in their tight dead circle, but I am not yet one of them," he writes.

After the war, Swofford returned to California and left the Marines when his time was up.

While working at a frozen foods warehouse, he wrote short stories and poems. He graduated from the University of California at Davis in 1999 and then was accepted at the University of Iowa's prestigious Writers Workshop, where he earned a masters degree. Swofford has been teaching English at Lewis & Clark College in Portland since last fall.

As people file into a Portland bookstore to hear him read from "Jarhead," he ruminates on what he learned about himself while writing the book.

What he discovered, he says, was a "young, confused man who was attached to this thing that was greater than he was -- the Marine Corps, the possibility of warfare, an exciting life that was possible through service."

"I wanted to get rid of that part of myself. I'm not a violent young man anymore."