New York — For a man who once fell off of a fire escape and crashed to the pavement below, writer James Frey looks pretty good. 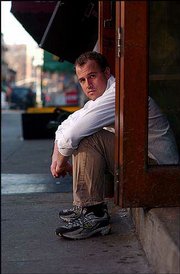 He pulls back his lip and points out a few faint white lines on the inside of his mouth. "That's where all the stitches were," he says. "My nose is still crooked but everything else has pretty much healed."

Ten years ago, Frey, who is now 33, ended up at the Hazelden drug and alcohol rehabilitation center in Minnesota with a broken nose, a hole the size of a nickel in his cheek and several broken teeth after he fell from a friend's fire escape when he was high.

He still isn't sure how he got up there, because he has no memory of the two weeks he spent before going to Hazelden, with its wooded grounds and walking trails. At the time, his list of addictions included everything from alcohol to crack to glue.

Doctors at Hazelden sewed up his cuts and gave him new teeth. Because he was an addict, all work had to be done without anesthesia, including the root canals.

It was a rough time in Frey's life, but also a time he felt needed to be told. His first book, "A Million Little Pieces," chronicles those hazy first days at the center and his eventual release two months later.

"I didn't want to write a book that glamorized or romanticized drugs, which is what a lot of drug books do. When I was a drug addict I quickly realized that being an addict is neither glamorous nor romantic."

Frey grew up in an affluent home in Ohio and later Michigan. His father was an international businessman. He started drinking when he was 10 simply because he saw adults doing it and it seemed like a cool thing to do. By 15, he knew he had a problem but didn't want any help and he didn't want to stop.

His editor at Doubleday, Nan Talese, almost passed on his manuscript because she thought it was just another addiction memoir. But after reading a few pages, the grim subject matter fascinated her.

"I was overwhelmed by the quality of the writing as well as the storytelling," she says. "The fact that this was his first book wasn't an issue, as I was more concerned about the author's passion."

Talese said that "A Million Little Pieces," which has an initial print run of 50,000 copies, fits in well with titles like "The Long Weekend," "The Man With the Golden Arm" and "One Flew Over the Cuckoo's Nest." They're all edgy, often disturbing books.

Frey's prose is raw and brutal. At times, he uses stream of consciousness to relate his fears, frustration and the challenge of kicking several addictions all at once and by himself. He often does not use punctuation and repeats mantras like, "I am an Alcoholic and I am a Drug Addict and I am a Criminal" throughout the book.

The journals Frey kept as part of his treatment served as important road maps to writing the book.

He says he was careful in his approach, writing one to two polished pages a day, seven days a week for 10 months back in 2000. It yielded him about 550 pages, 150 of which were cut from the final version. His writing experience came from the years he spent after treatment working as a screenwriter in Los Angeles and Chicago. (His credits include 1998's "Kissing a Fool," starring David Schwimmer and Jason Lee.)

"Part of the way I wrote it, I wanted the book to be addictive -- I wanted to make the reader feel addicted to something," he says. "Stripping away punctuation and formal sentence structure allowed you to get into my head and understand what I felt and how I thought."

He writes in the book, "I start shaking. Shaking shaking shaking. My entire body is shaking and my heart is racing and I can see it pounding through my chest and I'm sweating and it stings. The bugs crawl into my skin and they start biting me and I try to kill them. I claw at my skin, tear at my hair, starting biting myself. I don't have any teeth and I'm biting myself and there are shadows and bright lights and flashes and screams and bugs bugs bugs."