Coming-of-age story has dash of intrigue

Awe, excitement, love and heartbreak are universal themes in any coming-of-age story. The transition from adolescence into adulthood can be unpredictable and its natural dramas have made for many good books.

But when such a tale takes place in New York's South Bronx and involves a cocaine-snorting mother, a high-profile drug dealer and several visits to relatives in prison, you have a coming-of-age story with intrigue. 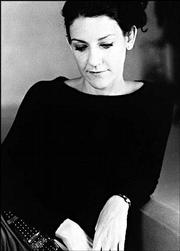 Author Adrian Nicole Leblanc follows the lives of two teenage girls in the South Bronx in her book "Random Family: Love, Drugs, Trouble, and Coming of Age in the Bronx."

That's what readers will find in Adrian Nicole LeBlanc's book "Random Family: Love, Drugs, Trouble, and Coming of Age in the Bronx."

LeBlanc follows the lives of Jessica and Coco, teenagers in the South Bronx during the 1980s and 1990s. They deal with pregnancies, get mixed up with the wrong men, go on and off welfare, and even go to jail.

Like many teenage girls, Jessica and Coco are fiercely loyal to their boyfriends. But this loyalty often sets them up for loneliness and even an FBI investigation.

LeBlanc has a keen, fly-on-the-wall approach to her storytelling and "Random Family" tells its tale from inside the neighborhood without editorializing or passing judgment. "Random Family" is reality TV in the form of an elegant book.

Her myriad characters have brutal, fast-paced lives that are sprinkled with small pleasures -- visiting a brother in jail or having an estranged boyfriend return for a night.

Usually, though, the girls struggle for life's barest necessities while everything around them is crumbling.

She re-creates the inner monologues of her young subjects as they face uncertain futures. She is adept also at subtly reminding readers that even though her characters are often involved in dangerous games of sex and drugs while raising their children, they still aren't old enough to legally drink or even vote.

"Coco brought sunflower seeds to slip to Cesar at his sentencing, but all she could do was wave," LeBlanc writes. "Cesar and Mighty drew indeterminate sentences of two to six years for the shooting. Mighty was sixteen and sentenced as an adult; at fifteen, Cesar still qualified as a juvenile and was sent to the Division for Youth, known on the streets as DFY. Rocco received five years probation. Coco joined another unpopular sorority: not only was she a pregnant teenager, she was a jailbird's wife."

Above all, LeBlanc should be lauded for her tenacious reporting over the course of a decade. "Random Family" reads as if LeBlanc were given a full-access pass to her characters' lives and followed them around like a dutiful servant.

Of course, she wasn't around for every intimate conversation or drug deal but she re-creates these scenes in utmost detail and paints a realistic, albeit sometimes unflattering, portrait of her subjects.

But LeBlanc is the invisible observer in the book. If Coco or Jessica are perceived as good or bad, it is because the reader has chosen to make that decision.

LeBlanc used her journalistic skills to lay out the choices and actions of her characters for what they were and leaves the rest up to the reader.