Chicago — The majesty and holiness of the Himalayas have enthralled art curator Pratapaditya Pal for nearly 50 years, and he believes religious art from those mountains can be a shelter in a war-torn world.

After a nine-year effort, Pal has assembled at the Art Institute of Chicago an unprecedented collection of that art from Tibet, Nepal, Bhutan, his own native India and the disputed territory of Kashmir. 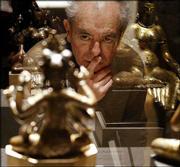 ART COLLECTOR GEORGE ORTIZ LOOKS at statues of goddesses from 10th and 11th century Nepal at a preview for a Himalayan art exhibit at the Art Institute of Chicago. The exhibit includes 190 works from both Buddhist and Hindu traditions ranging in date from the fifth to the 19th centuries.

"This art is holy, and this place should be a refuge of peace for you," said Pal as he previewed his exhibition, "Himalayas: An Aesthetic Adventure."

Pal had harsh words for the Americans and Europeans he accuses of polluting the Himalayas for adventure.

"For $50,000, anyone in this room can be carried to the top of Chomolungma (the Tibetan name for Mount Everest), and what does that prove?" he asked. "That you can leave your garbage on a sacred mountain?"

But Pal's prickliness vanished when he spoke of his beloved mountains and the art they have inspired. He called the Himalayas the connection between the Earth and the sky, the temporal and the eternal, the human and the divine. And he said the art of the region reflects this, regardless of whether it is Hindu, Buddhist or from the ancient Tibetan faith of Bon.

Pal, 67, who has been a visiting curator at the Art Institute since 1994, said he first saw the Himalayas in 1946 when his father sent him to a boarding school in the mountain city of Darjeeling.

Although he is now a resident of Los Angeles, Pal said he will never forget his first sight of the world's mightiest mountain range, nor the artistic and spiritual treasures he saw there over the succeeding decades.

The current show, which runs through Aug. 17, is Pal's attempt to present those treasures, as well as the religious philosophies that underlie them, to the outside world. The 190 works, many from private collections and never before on public display, are from both the Buddhist and Hindu traditions and range in date from the fifth to the 19th centuries.

A smaller version of the exhibition will run at the Smithsonian Institution in Washington from Oct. 18 to Jan. 11, 2004.

Art Institute spokesman John Hindman said the exhibition is the first to treat art from the whole Himalayan region in a comprehensive way.

Pal has organized the exhibition geographically. One section shows works from Nepal; the second has art from Kashmir, northern India, the western Himalayas and western Tibet; the third encompasses central and eastern Tibet, as well as Bhutan.

The Tibetan pieces are almost all Buddhist in inspiration, and the works from India are predominantly Hindu, but the collection from Nepal represents both faiths and illustrates a complex process of cross-fertilization in both art and mythology.

Pal explained that Nepal is the one region where both Buddhists and Hindus coexisted peacefully for centuries. He also noted that much of the Nepalese art -- particularly the statues -- were created by the indigenous Newar people, who still serve as an artistic caste. A family-run Newari studio might create a statue for a Brahmin priest one month and one for a Buddhist abbot the next, he said.

Whether in metal, stone, terra-cotta or paint, the Newari style is graceful, usually with meticulously rendered slender and youthful figures. The figures in the works from India and Kashmir, however, are more sensuously rounded and more overtly sexual.

But sexual elements are not lacking in the art from any of the regions. Despite their ancient tradition of asceticism, both the Hindu faith and the Tantric form of Buddhism that predominates in the Himalayas make much of sexual symbolism and the union of the male and female principles.