New York — Martin Treat returned home from Vietnam in 1970, facing the anti-war sentiment of many Americans. Feeling rejected, he burned his uniform.

His father, a World War II vet, gave Treat a copy of "Brave Men," a collection of columns written by one of America's most famous war correspondents, Ernie Pyle. Treat was uplifted by Pyle's stories about the grunt GI and life in the foxholes of World War II. 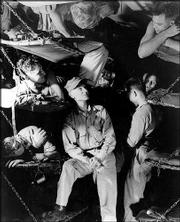 AMERICAN WAR CORRESPONDENT Ernie Pyle, center, talks with Marines below decks on a U.S. Navy transport during World War II in March 1945. Pyle's life and words are the subject of the one-person show, "Ernie Pyle's War."

"After reading 'Brave Men,' I also began to understand my dad's generation," Treat said in an interview. Ernie Pyle turned him on to the idea of "honor the warrior and not the war," the motto of Vietnam Veterans Against War, an organization to which Treat still belongs.

Some 30 years later, now a seasoned actor and high school English teacher, Treat began writing his one-man show based on Pyle's words, which he performs at a small theater less than two blocks from Times Square.

"Ernie Pyle's War," Treat's adaptation of two biographies and Pyle's reports from the field, opens with the correspondent sitting at a typewriter as he contemplates his column for the day.

The starkly lighted set uses few props: a typewriter, a steel helmet, a soldier's small shovel, ammunition box and a black chair and table on which are spread Pyle's dispatch folders. As Treat speaks, historic photographs and film footage flash behind the actor. Music from the 1940s plays in the background, and at key points, the sounds of war -- gunfire, explosions, diving planes -- punctuate Pyle's words.

The square-jawed actor-playwright is about as tall as Pyle at 5 feet and 7 inches, but he is more solidly built than the wiry reporter appears in photos. Treat speaks energetically and talks directly to the audience: "This is what I do. I talk with people. I've listened to thousands of Americans over the years."

Treat first staged the Pyle show last December in the basement of a midtown bookstore. It ran a few weeks. The current version, which he says he's "still tweaking," will run at least through May 17 at the McCaffrey Theatre in Holy Cross Church.

Treat, 57, performed for 10 years in a variety of small theaters in New York in the 1970s and 1980s before "the roles dried up" and he took the teacher's exam. Using what he learned when he gained a masters degree in acting, he soon discovered he had "a knack for bringing excitement to the classroom."

One reason he took on the Pyle project, he says, was to encourage a new generation to read the journalist's work. He started his own research by reading two biographies, "The Story of Ernie Pyle" (1950), by Lee G. Miller, and "Ernie Pyle's War" (1997), by James Tobin.

Before the war, Pyle was a columnist, reporting from an extended trip across the United States.

"He was determined to travel to all 48 states, Hawaii and Alaska, and tell the story of common Americans," Treat says. Early in the play, the actor gives an account of those travels in Pyle's plain, moving prose:

"You could wear out a lifetime on the dusty plains with that wind of futility blowing in your face. And when you are worn out and gone, the wind, still saying nothing, still so gentle and sad and timeless, is still blowing across the prairies, and will blow in the faces of those who follow you, forever."

Assigned to cover World War II, Pyle shared foxholes with GIs in the sand of North Africa and the mud of Italy, telling their stories. He won the Pulitzer Prize in 1944 and by the D-Day invasion, officers were competing to get him to report from their units.

In his columns, syndicated by Scripps-Howard in more than 250 newspapers, Pyle often included details that no correspondent could today, such as a soldier's hometown and even his street address.

In one column from North Africa, Pyle wrote:

"I'm sharing a foxhole with Private Malcolm Harbin, a farmer from Peru, New York. An 88-millimeter shell hits the ground above and a fragment of shrapnel flies between his arm and chest, tearing his shirt all to pieces. But by God, he isn't scratched."

Treat portrays the correspondent's journey through World War II from North Africa to Italy, D-Day and then to the liberation of Paris. Near the end, he shifts to the Pacific, where Pyle follows the Marines to Okinawa, still tracking the lowly GI.

The play mostly uses Pyle's words, the drama emerging through Pyle's language. But it reaches its climax with dialogue written by Treat, as Pyle talks about the final moments of his life on the island of Ie Shima, when he was killed by Japanese machine gun fire in April 1945. Dead at age 44, the journalist was mourned as a hero.

An earlier version of the play, developed in a summer workshop, was three hours long with an intermission. The current, cut-down version, directed by Lawrence Carr, runs about an hour with no intermission.

"We can only give a taste of Ernie's work in our play," the playwright says, "The full meal awaits the reader."