Pittsburgh — About 2,000 friends, celebrities and strangers gathered Saturday to celebrate the life of Fred Rogers, the television pioneer whose "Mister Rogers' Neighborhood" has been watched by generations of children.

John Rogers said his father met Ralph Waldo Emerson's definition of success: "To laugh often and much; to win the respect of intelligent people and the affection of children ... to know even one life has breathed easier because you have lived." 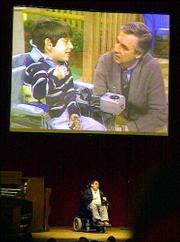 Jeffrey Erlanger of Madison, Wis., takes part in a public memorial to children's television pioneer Fred Rogers of "Mister Rogers' Neighborhood" in Pittsburgh. Shown onscreen at Saturday's memorial is Erlanger in the early '70s as he appeared during a visit with Rogers on the show. Rogers died Feb. 27 of stomach cancer at age 74.

The public memorial was a little more than two months after the 74-year-old creator and host of "Mister Rogers' Neighborhood" died Feb. 27 of stomach cancer. His March 1 funeral was private.

Composer and violinist Itzhak Perlman, in town for a symphony appearance, learned of the memorial at the 11th hour and performed a Bach piece as a tribute.

"Fred Rogers played a very integral part in our household while our five children were growing up," Perlman said, a sentiment seemingly shared by every parent in attendance.

"We both watch the show, so it's a legacy that's been passed on," said Pittsburgh resident Rebecca Perry, 44, who brought her 6-year-old son, Raheem, to the service.

A Presbyterian minister, Rogers began producing the show in 1966, going national two years later. The final episode was taped in December 2000 and aired in August 2001, though PBS affiliates continue to broadcast back episodes.

He kept the message of his gentle, low-key show simple throughout the years, telling his viewers to love themselves and others.

Rogers "personified friendship to a generation of children," said Teresa Heinz, the wife of Sen. John Kerry, D-Mass., and a board member of Family Communications Inc., producer of "Mister Rogers' Neighborhood."

"He was able to look past the differences that so often are all we can see in life. He found, instead, what we all had in common: the need to feel special," Heinz said.

Jeffrey Erlanger was a young boy when Rogers invited him on the show after meeting him and his parents in a restaurant in the 1970s.

Profoundly disabled, and still using a motorized wheelchair due to his undersized limbs, Erlanger joined Rogers in singing "It's You I Like" -- a song about looking inside a person, not at the person's appearance.

Erlanger, who now lives in Madison, Wis., told the crowd his friends often ask how long it took to tape that 10-minute segment, assuming that Rogers' demeanor was an act.

"And I would tell them, it took 10 minutes to tape it, and the reason it did was because he just wanted to sit down and talk to me like we were old friends," said Erlanger, who continued to correspond with Rogers until his death.

Pat Mitchell, president of the Public Broadcasting Service, played a clip of Rogers testifying before the U.S. Senate, which was mulling public television budget cuts in the early 1970s.

The brusque subcommittee chairman confessed to having "goose bumps" after Rogers explained why the funding was needed by quoting the words from one of his simple songs about dealing with anger.

"No one else made the case better and continues to make it today ... for a national public television system," Mitchell said.