The 60-year-old composer has written enough electronic music over the past 35 years to fill at least seven albums and numerous concerts. 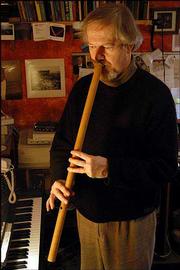 INGRAM MARSHALL PLAYS the gambuh, a Balinese flute, in his home studio in Hamden, Conn. The 60-year-old composer has written enough music to fill at least seven albums and produced numerous concerts.

Critics have described his work variously as romantic, mournful, eclectic, haunting and "... producing a soothing cacophony of dark yet comforting sounds."

Marshall has written complex works for both electronic and acoustic instruments, using techniques such as digital delay, filtering of voices and tape looping in "live-electronic" concerts.

"His music is absolutely beautiful, striking and wonderfully made from the point of view of craft and technique," says Greg Sandow, classical music critic for The Wall Street Journal.

In recent years, Marshall has scored compositions for more traditional groups, including the Kronos Quartet, Paul Hillier's Theatre of Voices and the American Composers Orchestra. The orchestra premiered "Kingdom Come," the title piece of his newest album, at Carnegie Hall in 1997.

His CDs can be found in the new music, classical or pop sections of record stores, but they're usually near albums by Philip Glass, Steve Reich and his friend John Adams -- "minimalist" composers to whom he's most often compared.

Three of Marshall's pieces -- the string quartet piece "Evensongs," a solo piano piece "Authentic Passage" and his electronic work "Fragility Cycles" -- will share the program with works by Adams and Terry Riley in early June as part of the Berkeley Edge music festival at the University of California, Berkeley.

Marshall, his wife, Veronica, and their son, Clem, have lived in their modest frame house in Hamden, a quiet New Haven suburb, since 1990. The composer says he's inspired by the studio's red walls and a flamboyant Balinese mask mounted on the wall.

"He watches over me like a blessed spirit, a benevolent god," Marshall said of the mask. It's been in each of his studios over the years since he brought it back from a visit to Indonesia in 1971.

His trip to Indonesia, where he studied Javanese gamelan music, had a strong influence on Marshall's early compositions. The music's gradual pace -- "played by a metallic orchestra with gongs and other percussion instruments" -- set the tone for the slow unfolding of themes in his own work.

He also learned to play the gambuh, a Balinese flute. He pulls down one of his two gambuhs from its perch on the wall and plays a few mellow notes.

Marshall first became interested in electronic-based music as a graduate student in music history at Columbia University in the 1960s. The excitement of the electronic music lab, and the loss of his master's thesis about an obscure 18th-century composer from the saddlebag of his motor scooter, was an epiphany: What he really wanted to do was create music.