And then there's Peter Nichols' "A Day in the Death of Joe Egg" and Eugene O'Neill's monumental family drama, "Long Day's Journey Into Night," not to mention the Greek tragedy "Medea." 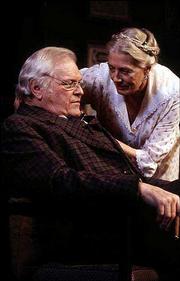 Brian Dennehy and Vanessa Redgrave star in the Broadway revival of Eugene O'Neill's "Long Day's Journey into Night." The play is among those being considered for Tony Award nominations.

When the 2003 Tony Award nominations are announced Monday, expect the biggest battles to be among the old, not the new. Revivals, in both the musical and play categories, could provide most of the spirited competition for Broadway's highest honor.

The season has been a strange one for Broadway's box office, with an unusually cold winter, the four-day musicians strike, the U.S.-led war in Iraq and the general economic malaise contributing to a slippage in business.

Still, there has been one smash musical hit -- "Hairspray" -- and several productions that have done well because of their stars: "Our Town," Paul Newman; "Salome," Al Pacino, and "Life (x) 3," Helen Hunt and John Turturro.

"Hairspray," based on the cult John Waters film comedy about a chubby high school girl, most likely will come out on top with nominations.

Nominees will be announced at Sardi's, the theater-district restaurant, with John Lithgow and Melanie Griffith doing the honors. Lithgow was a Tony winner last year for "Sweet Smell of Success," while Griffith goes into the cast of "Chicago" in July to play Roxie Hart. And she has another reason for hanging around Broadway. Her husband, Antonio Banderas, currently stars in a revival of "Nine," the 1982 Tony winner for best musical.

"Nine," the saga of a woman-obsessed film director, is expected to be one of the top contenders and is a model of what a good revival should be -- a celebration of what was on stage in the past but reimagined for the present. The Maury Yeston-Arthur Kopit musical is a shoo-in for a musical-revival nomination along with "Gypsy" and "La Boheme," Baz Luhrmann's youthful version of the Puccini opera. 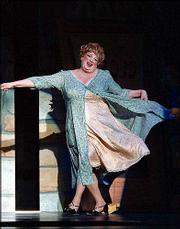 Harvey Fierstein dances in costume as Edna Turnblad in the hit Broadway musical "Hairspray," in this undated publicity photo. The show is among those being considered for Tony Award nominations to be announced Monday.

To fill out the category, the fourth slot will most likely be "Man of La Mancha," starring Brian Stokes Mitchell.

Banderas should get a nomination in the actor-musical category. His main competition will be Harvey Fierstein, playing the lovely Edna Turnblad in "Hairspray." Marissa Jaret Winokur, who plays Fierstein's daughter in the show, will nab an actress-musical nomination. So will Bernadette Peters, pulling the comeback of the year as Rose, the ultimate stage mother in "Gypsy."

Initial reports, when "Gypsy" was in previews, were not good for Peters or the musical, regarded by many in theater as the best ever written, with a book by Arthur Laurents, music by Jule Styne and lyrics by Stephen Sondheim. But by the time it opened May 1, both had triumphed.

Nominations will mean national television exposure on the Tony telecast, from 7 p.m. to 10 p.m. CDT June 8 on CBS, and a shot at more ticket sales. Also, Tony nominators tend to favor shows that are still running.

That won't be a problem for such hits as "Hairspray" and "Movin' Out" -- Twyla Tharp's stage celebration of Billy Joel songs -- which most likely will compete in the musical category along with the charming children's show, "A Year With Frog and Toad."

A fourth nominee could be either "Urban Cowboy" or "The Look of Love: The Songs of Burt Bacharach and Hal David," both panned by critics but still surviving.