"The best comics that have ever been produced are coming out right now," says Jai Nitz.

"If you compare a comic book today -- artistically, story-wise, from the paper it's printed on to the aesthetic of the product itself -- to a comic that was produced 10 years ago, today's stuff blows it out of the water."

So it's all the more impressive that the Lawrence-based writer has just landed one of the medium's most prestigious honors. Nitz was announced as a recipient of the Xeric Foundation grant. He and five other self-publishers divvied up a total of $25,452 to go toward realizing their respective projects.

The Xerics were founded in 1992 by Peter A. Laird, creator of the Teenage Mutant Ninja Turtles.

"It's like the comic book equivalent of winning Sundance," Nitz explains. "It's not an Oscar; it's not a Golden Globe. But it's like this total indie, street-cred thing. The people who have won it have gone on to do some great things."

Nitz's "Paper Museum (Vol. 2)" was the vehicle responsible for the honor. It's an action-adventure anthology divided into four stories, two of which are written by Nitz and illustrated by an ensemble of artists.

"The main inspiration for the first issue was pulp fantasy," he says. "It was the stuff of the 1920s that were pre-comics: mystery men in a suit and mask, or a jungle lord, or a spaceman, or a Conan-like sword and sorcery guy. It was something that after the turn-of-the-century still captured the imagination of everybody."

The upcoming installment which the grant financed will feature four completely different tales: an Old West revision titled "Slim Fulton: Steam Powered Cowboy"; a noir detective set in the trenches of WWI; an espionage saga about a hunted spy who recruits help from an ex-girlfriend; and a fantasy vision of what truly happened to Kansas aviator Amelia Earhart. 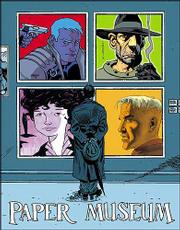 The latest issue of "Paper Museum" will come out in July.

Oddly enough, the author is the second person in a row named Jai to win the Xeric grant. Author Jai Sen was the recipient of the 2002 award.

"There are three people named Jai on the planet who want to make comics, and two of us have won the Xeric grant," Nitz says, laughing.

And no, Jai Nitz is not a pen name.

The writer was so christened after his father and brother spotted a character called Jai the Jungle Boy while watching reruns of ABC's "Tarzan" show (1966-1969).

"When my mom was pregnant with me she bought into it, unfortunately," he relates.

(Nitz is of Germanic origin, likely shortened from Nietzsche, he adds.)

So far the name has been quite a calling card for the 27-year-old writer.

"One of my artist friends was doing a little bit of stuff for 'Paper Museum' and saying, 'It's by this guy who is IMPROBABLY named Jai Nitz.'"

Although Nitz is being honored for his own Jungle Boy Press publication, he has already made a splash in the comic world handling iconic characters for more established companies.

His ambitious take on The Fantastic Four, in which Reed Richards explains the meaning of God to his young son, appeared in January's Marvel Double Shot #3. He took over the reins of Dark Horse's Hellboy for a role playing game package that came out last August. ("Of all the things I wanted to do, Hellboy was number one," Nitz says of the paranormal series that will hit the big screen next summer). He's also contributed to DC's "The Joker's Last Laugh Secret Files" and Wildstorm's "Genactive." 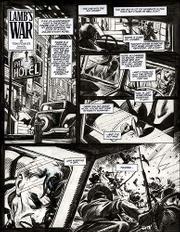 "Lamb's War" is one of four entries in Nitz's upcoming edition of "Paper Museum."

Not bad for a guy based in Kansas.

"I'm staying in Lawrence until they throw me out," he says. "It used to be in comics you'd have to go to New York because that was where the scene was ... But since then, there are people who live in Thailand. They have a FedEx drop and a modem -- that's all they need."

"They understand that the comic book to me is not this trash art form that gets thrown away," he says. "It's a very serious artistic endeavor. Creative people always flock to each other. It's great that Lawrence is as open and encouraging to the arts as it is. I know in Kansas City that in the vast suburban-plex there's not a whole lot of support for any given art."

Raised in Olathe, Nitz graduated Kansas University in 1998. Although a product of the Theatre and Film Department, his emphasis in cinema primarily involved screenwriting. The focus allowed him to juggle the angular themes and ever-evolving characters typical of the comic book milieu.

At first he tried drawing them also.

"I gave up," he says, smiling. "Not that I don't draw anymore or don't do art just for me. There reached a point where I said, 'This sequential stuff is a lot harder than it looks on paper.'"

Nitz's day job is working for the payroll company ADP. Inevitably, he finds inspiration for new stories while on the clock.

"I always keep several legal pads in front of me to scribble ideas down," says Nitz, who first started self-publishing anthology comics with 2000's "Novavolo."

Unfortunately, given the current status of the comic industry, Nitz is not at the point where he feels comfortable quitting his day gig.

"Financially, it's in the worst shape it's ever been," he admits. "I don't know that there's any industry since its inception that has lost readership every year.

He points to the fact that around 1938 when Superman made its debut, the comic trade began selling "millions of copies of everything." This was due in part to the limited amount of visual-based entertainment available at the time.

"As the war hit, comics were incredibly popular," he explains. "It dwarfed every other medium that existed. Since then, it's gradually declined. Even if there are spikes in the '60s and '90s, we're still losing sales."

"But the average comic not by Marvel or DC probably sells 5,000 copies," he says.

Despite the fiscal downturn, the popularity of comic book characters is arguably at its highest plateau yet.

One only has to look at the deluge of material appearing in television, video games and especially feature films. Not only are blockbusters like "X2: X-Men United," "Daredevil" and "The Hulk" examples, but less obvious projects such as last year's Oscar winner "Road to Perdition" were culled from the pages of a comic book.

"It's invaded every aspect of popular culture," Nitz says.

"Everybody now knows who the X-Men are; everybody knows who Spider-Man is; and they not only know that Peter Parker Spider-Man but that his girlfriend is Mary Jane. Girls that were in my wife's sorority can tell me about the X-Men, about Storm and Wolverine ... These are the same girls that would have never gone out with me in high school because I had an X-Men T-shirt on. "