New York — Eminem may poke fun at himself in videos, but he doesn't want "Weird Al" Yankovic doing it.

Eminem won't give Yankovic permission to shoot a video for his new song, "Couch Potato," a parody of Eminem's Oscar-winning tune "Lose Yourself," Yankovic said. 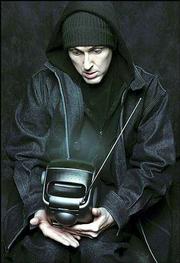 Weird Al Yankovic, portraying rapper Eminem, has been denied permission from the rapper to shoot a video for his new song "Couch Potato." The song is a parody of Eminem's Oscar-winning tune "Lose Yourself."

"The only reason I could glean was that making a Weird Al music video would detract from his legacy as a serious hip-hop artist," Yankovic said. "It's very disappointing. This could have been my best video ever."

A representative for Eminem did not immediately return a call Friday.

Eminem parodies himself and other celebrities in some of his most famous videos, including "Without Me," where he depicts himself as a fat Elvis Presley.

Artists who have allowed Yankovic to parody their songs and videos over the years include Michael Jackson -- whose hits "Beat It," and "I'm Bad," became "Eat It," and "I'm Fat" -- and Madonna, whose "Like a Virgin" became "Like A Surgeon."

Yankovic said the rapper allowed Yankovic to redo the theme song from the hit movie "8 Mile," but said he would need to hear the final mix before granting the video rights. After receiving the final version of the parody -- which pokes fun at TV addicts -- the rapper's representatives said he would not allow a video.

Yankovic said Eminem also refused to allow him to release the song as a commercial single. It's the first cut on his 11th album, "Poodle Hat," which also parodies songs by Avril Lavigne and rapper Nelly. It's due out May 20.