New York — Here's the dirt on Conan O'Brien: His show has been remodeled in clay.

In the grand tradition of "Celebrity Deathmatch" and "Wallace and Gromit," NBC's "Late Night With Conan O'Brien" has been transformed into clay animation for an episode that will air Thursday night. 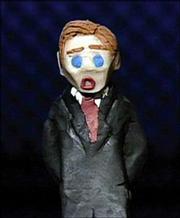 A clay-animated Conan O'Brien does his monologue in this image from the clay-animated episode of "Late Night With Conan O'Brien" that will air Friday. The episode, in production for months, is a clay re-creation of a "Late Night" hour that aired in its original, live-action version last October.

"This may be the best show we've ever done," O'Brien declared Friday -- "in clay."

The episode, in production for months, is a clay recreation of a "Late Night" hour that aired in its original, live-action version last October -- including the show's opening, monologue and even lead-ins to commercials.

The animation is not nearly as life-like as the popular "Celebrity Death Match" caricatures on MTV, hewing closer to the more crudely rendered "Mr. Bill" segments of "Saturday Night Live" fame.

Guests on the episode (which airs Friday at 11:35 p.m.) are "Jackass" star Johnny Knoxville, comedian Richard Lewis and musical guest David Bowie. In addition, the show features O'Brien's recurring look into the future in one of his signature sketches, "In the Year 2000," with surprise guest Mr. T.