New York — The best beach days are sunny and bright, but don't be surprised to see a rainbow from your sandy perch.

Swimsuits in both primary and pastel colors are riding a new wave of popularity as the basic black suit, a long-time favorite, moves a bit into the background. 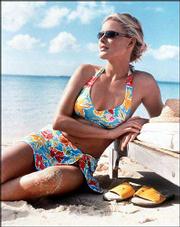 Liz Claiborne Swimwear's "skirtkini" in a bold floral print combines a brightly colored swimsuit with a functional silhouette, both big trends this summer.

"Color is important this year," says designer Anne Cole. "Too many people want to hide behind black. ... I could live forever without black."

Many women worship black because they think it makes them look slimmer, which often is true, according to Cole, but navy and dark green do the same trick.

And, she adds, at the beginning of the swim season, black usually accentuates the dullness and pastiness of skin that has been covered up for months.

When it comes to swimwear, no matter what a woman's shape is, finding the right cut is much more important than the color. If a bikini works for your shape, stick with it, and the same goes for a tankini, maillot or halter, Cole advises.

Instead, she says, change colors and patterns each summer to keep your look fresh -- it's what designers do with their own lines: "If we don't keep changing somehow, we'll lose our customers, but customers also are incredibly loyal to this or that suit they got years ago."

No one will be lacking color and pattern choices this summer.

The company also is introducing a new silhouette called the "skirtkini," a two-piece swimsuit with an attached skirt that serves the double purpose of a cover-up.

At Target, a "petunia patch" covers an Xhilaration retro-style, tie-bottom bikini, and there are psychedelic paisleys and stripe patterns of varying widths and directions.

"Swimwear is playing off what went down the runway for spring and summer," says Michelle McCool, fashion director at Cosmopolitan magazine, which devotes a large section of its May issue to bikinis. "It's a rainbow season."

Bright-colored suits might look scary on the hanger, so shoppers should head into stores' dressing rooms with armloads of options and then try on each and every one, McCool suggests.

The eye-catching bold, optical prints, though, are more for women who are proud of their bodies and want to draw attention to themselves, she says, while vertical stripes down a swimsuit's sides or a demure floral will work for fuller figures.

There's also a practicality to colors and prints: It makes a coordinated beach ensemble -- a bag, flip-flops and a cover-up, much easier to put together.

But if you are married to a black swimsuit, McCool says, at least get one of the zillions of cheerful pareos out there.