Burbank, Calif. — The 1977 debut season of the bawdy comedy "Three's Company" was all hugs, kisses and cheering studio audiences.

Critics and moralists hated the double-entendres and sexual hijinks. But viewers loved the premise: two single women (Suzanne Somers and Joyce DeWitt) sharing an apartment with a man (John Ritter) who intimated that he was gay so his landlord would let him live with the women. 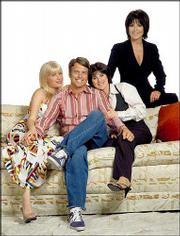 Actors Jud Tylor, left, as Suzanne Somers, Bret Anthony as John Ritter, Melanie Deanne Moore as Joyce DeWitt, and Joyce DeWitt are shown in this promotional photo for the T.V. movie "Behind the Camera: The Unauthorized Story of 'Three's Company.'" The movie focuses on tension on the set of the '70s comedy after Somers hired a new agent and demanded a higher salary.

Then Somers, who played ditsy blond Chrissy Snow, got ambitious. According to the movie, she drove by a famous swimsuit poster of Farrah Fawcett and proclaimed: "I want that."

Those three little words launched a torrent of backstage turmoil shown in the NBC movie "Behind the Camera: The Unauthorized Story of 'Three's Company."'

DeWitt, 54, is the only one of the trio who participated in the gossipy movie that depicts Somers in a less than flattering light.

"I know John is thrilled about it because he told me," DeWitt said. "He's very comfortable with it. I think he saw what I saw -- really, really intensely, sensitive, personal things that were very public are going to be public once again."

Somers, 56, wasn't consulted about the movie, but DeWitt guesses that "she would be curious to take a look at it."

Not a chance, said Somers' spokeswoman.

"She doesn't like to comment on things that are negative," publicist Judy Hilsinger said. "She's really gone so far beyond all of this."

DeWitt was conflicted about signing on. She said she spent three weeks pondering the decision while staring at walls and walking in the mountains near her Santa Fe, N.M., home.

"People are going to perceive that this is a movie I wanted to do, that I made up the story, and I'm like, 'Oh, my God in heaven, (that) is so far from the truth,"' she said.

Powerless to stop the project, DeWitt wanted to make it accurate. At times, she found herself at odds with producers.

DeWitt narrates the story and appears in interview segments inserted between scenes.

The movie focuses on Somers' diva-like behavior after she acquired Fawcett's manager Jay Bernstein and told him she wanted superstardom. Soon Somers' face was plastered on lunch boxes and fake $1 bills.

By 1979, Somers replaced Bernstein as manager with husband Alan Hamel. He demanded that Somers be paid six figures per episode and have 10 percent ownership of the show. At the time, she was making $30,000 per episode.

Producers refused Somers' demands, and reduced her role to an occasional brief scene. Eventually, she was written off the show and her career declined.

The movie pretends to know what went on in the private conversations between Somers and her husband. Without his influence, would Somers have made those demands?

"Suzanne was this young girl, and so all by herself would she have come up with those kind of things? Probably not," DeWitt said. "Was she willing to participate when they were brought up to her? I guess so, that's what history would tell us."

DeWitt and Somers went years without talking, although DeWitt is forgiving now.

"Everybody was so young. None of us are the same people we were then," she said. "'Three's Company' was an E-ride from Disneyland. There was a small amount of time that was difficult. Most of the time it was the best place on planet Earth to work."

DeWitt said she and Somers had been in contact during the past year. "We're in the process of exchanging notes, which pleases me greatly," she said.