Growing up the Hardaway 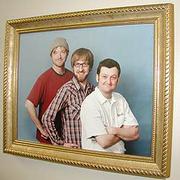 Midway into recording their third album, the Hardaways developed a saying to describe their frustrations with the recording process.

"We'd get to the 50th take and say, 'Let's kill this baby,'" said lead singer and guitarist Jeff Ferrell. "The song is your baby and you love it, but after 50 takes you start to hate it. You want it to be done."

The saying stuck, and after playing around with various connotations -- "'Pregnant With A Dead Baby' didn't work," explained drummer Andy Bricker -- the Hardaways found a fitting title for their third album: "Born Dead."

"It was like the songs were dead as soon as they were done," Bricker said. "We had barely played any gigs by the time we started recording the record. Nobody really liked us ... we were recording it just because we wanted to."

"I'm not into infanticide or anything," he joked.

Doing it the Hardaway

Despite their low expectations, the band actually gave "Born Dead" a very successful birth. The album's release party at the Replay Lounge drew a packed house, and the album earned heavy rotation on KJHK. It was a satisfying time for the Hardaways, who estimated they put in more than 500 hours recording the album in their home studio.

"The number of hours was kind of inflated because of the learning curve," Bricker said. "We were learning new recording techniques: doubling a lot of things and adding harmonies for the first time."

Unsuspecting listeners might be surprised to learn that "Born Dead" was self-produced. The album brims with a clarity and pureness reminiscent of higher-budget studios. Though the professional sound can be partly attributed to engineering know-how and dozens of hours at the mixing board, the Hardaways aren't shy to give props to the all-important fourth member of the band: the credit card.

Elastic plastic also helped the band finance an $8,000 tour van and $3,000 rig to haul their piece de resistance: a grand piano that they haul to every show.

"When we bought the piano we took a lot of pictures of the guys who were moving it," Ferrell said. "We got out the tape measure and took some measurements, asked them a lot of questions. They were surprisingly open ... we just copied their rig exactly." 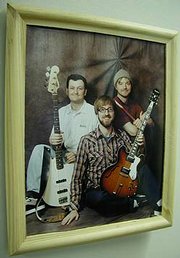 Though the Hardaways are equally adept at guitar rock and piano pop (Ferrell alternates instruments live), it is the piano tunes that have helped the band establish a unique profile around Lawrence. Ferrell has been re-teaching himself to play piano since he was 18.

"I took piano from my Mom when I was young and I hated it," he said. "She paid to have me go somewhere else because I was so whiny."

"Usually my approach is play what I want to hear. You've only got five fingers, so you set your chord up, either stretch it longer or put a finger down in the middle, and make it sound different."

Perhaps the most distinguishing element of the Hardaways, however, is Ferrell's unmistakable voice. Part Elvis Costello, part John Flansburgh of They Might Be Giants and part disgruntled lounge singer, Ferrell's croon cuts through the music with the delicate touch of a buzz saw. It's a gift that pushes Ferrell's clever lyrics into the forefront and demands the listener's undivided attention.

"I admire songwriters who don't take themselves too seriously," Ferrell said. "Self-deprecation is a big part of my personality."

Ferrell questions his own mortality on songs like "Why Am I Not Dead", where he sings: "Why am I not dead / Seems everybody dies instead / How am I the guy who's earned the right to live?"

Even as he reveals his insecurities, Ferrell demonstrates an uncanny ability to step outside himself and laugh. On "Have I Given Up" he asks: "Have I given up on love or have I found my stride / Am I satisfied / Am I telling myself lies / 'Cause I can't tell / When I look into my eyes / I just see myself."

"It's pretty existential," Ferrell said of the album's lyrics. "How you exist, how you interact with your surroundings and what's real." 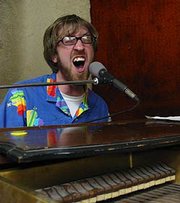 "The Graduation Song" reveals some very pointed opinions about college and growing up: "With clear conscience and clear mind / I say education's a sham / Walked the talk now I got mine / But that degree don't mean a damn / Doesn't change who I am and where I stand / I'm just another working man."

"On a political note, I think paid education is total bullshit," said Ferrell, who graduated from KU with a film studies degree. "That's just classist to me, that you have to have this amount of money to get this education that qualifies you for this position and this amount of income."

Bricker and Ferrell met in 1998 while working at Yello Sub on 12th Street. The two shared similar tastes in music -- the Beatles, Liz Phair (for whom Ferrell penned the song "Call Me Johnny"), Wilco and Johnny Cash -- but didn't seriously think about playing together until a "stroke of fate" turned them into roommates.

"My roommate got Jeff's sister pregnant so we swapped roommates," Bricker explained.

The duo recorded their first two albums -- "Lonely Son of a Good Mother" and "Seven, Eight, Nine, Ten" -- on an eight-track tape machine, splitting time between Ferrell's parents house in Overland Park, which had a piano, and their own kitchen, where they tracked most of the vocals.

"It's really apparent to me now that it was recorded in the kitchen," Bricker said. "You can hear the linoleum."

Bassist Ron Raney, formerly of Jeffery Lee and the Pale Moon Kings, joined the band in 2000 after the release of "Seven, Eight, Nine, Ten." Since then, the Hardaways have gigged regularly around Lawrence at the Bottleneck, the Eighth Street Tap Room and the Replay Lounge ("Our favorite place to play"). They've also worked up a deep catalog of covers, spurred on by playing tribute nights to George Harrison, the Pixies and the Clash.

Bricker sent out a few copies of "Seven..." in hopes of attracting label interest.

"A couple were nice enough to mail rejection letters," he joked.

Ferrell said he plans to do more mailings with "Born Dead," but isn't counting on any labels to take on the band.

"It'd be nice to have some help with money but we'd also be happy just to be out on the road selling our albums," he said.

The band's latest undertaking is learning the B-side of The Beatles' "Abbey Road" for friend Chris Bulgren's (The Bubble Boys) wedding. They'll play their first out-of-town gig later this month in Minneapolis and will soon begin work on their fourth album, a double disc featuring one disc's worth of new material and a second with reworked tunes from the past.

Asked about where they hope to be in three years, Bricker and Ferrell said they hoped to be touring, working less and...

"Having an affair with Liz Phair," Bricker joked.