Washington — Word that President John F. Kennedy was involved with a teenage intern adds to his reputation as a skirt chaser. Kennedy also has been linked with mob moll Judith Exner, Mary Pinchot Meyer and Marilyn Monroe, among others.

President John F. Kennedy carried on an affair with a teenage White House intern and had sex with her on official trips and possibly in the White House, a noted historian said Sunday. 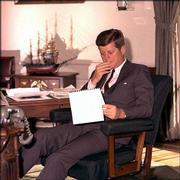 President John F. Kennedy goes over some notes at his desk in the White House in this Jan. 18, 1962, file photo. A new biography of JFK proposes that he had an affair with a teenage White House intern.

More than three decades before Bill and Monica, JFK squired the attractive 19-year-old, who had only the barest of qualifications for an office job, said Robert Dallek, author of "An Unfinished Life," a new biography of Kennedy.

"She had no skills. She could answer the phone," Dallek told "Dateline NBC." "Apparently, her only skill was to provide sexual release for JFK on those trips and maybe in the White House."

Dallek called the illicit affair one of a long string of "peccadilloes" by the dashing young President -- but the only known sexual link to a young intern. "There were lots of women," Dallek told the New York Daily News. "The real question is: Did it distract him from his job as president? I think it really didn't."

Ironically, the handsome Kennedy was Bill Clinton's boyhood hero. Clinton proudly treasured a video clip of him as a teenager shaking hands with Kennedy during a visit to the White House just four months before JFK was assassinated on Nov. 22, 1963.

JFK's intern fling was disclosed by one of his White House aides, Barbara Gamarekian, in an oral history that was recently unsealed after gathering dust for years.

Gamarekian told The News she remembers only the woman's first name -- and refused to reveal it. Dallek said he does not know the name.

"It amazes me there continues to be such fascination with all things Kennedy," said Gamarekian, now 77 and battling ovarian cancer.

Camelot insiders have said Kennedy's affairs were an open secret in the White House but roused little debate in an era when a President's private life was considered sacrosanct.

Whenever Jacqueline Kennedy was out of town, the chief executive juggled a virtual harem of attractive girlfriends, including mob moll Judith Exner, who claimed she got an abortion arranged by Mafia boss Sam Giancana after JFK made her pregnant, and Mary Pinchot Meyer, who was mysteriously killed months after Kennedy was shot.

There were even whispers of a fling with Marilyn Monroe and insatiable romps with a pair of presidential aides known only as "Fiddle" and "Faddle."

Gamarekian initially asked that the 17 pages in her oral history dealing with the intern be kept secret for a decade, but she later asked the Kennedy Library in Boston, where her account is archived, to keep it sealed.

Dallek persuaded her to reveal the information when he came across the blacked-out pages while doing research for his book, which goes on sale Tuesday.

The newsman described her as "a colt, young and very trim," with remarkably limited clerical skills.

On a presidential trip, the young woman was spotted with a security escort taking a hotel freight elevator up to the presidential suite, the reporter said. "I don't have anything but the vaguest idea of what went on up there," said the former newsman, who asked not to be identified. "She could have been up there shining his shoes."

The Kennedy Library now will make public the entire transcript, including the racy, 17-page gap.

The most famous White House intern, Monica Lewinsky, would not bite when asked through a representative about the intern escapade that predated her by four decades.

"What comment could she possibly have?" spokeswoman Barbara Hutson said of Lewinsky, who now is host of a reality dating TV show on Fox. "She didn't see it, so she doesn't know. Basically, because she doesn't watch television."

Along with the intern affair, Dallek's new book includes startling revelations about JFK's health, which the author says was dramatically worse than the public ever knew.

Kennedy -- who suffered from chronic back problems and Addison's disease, a rare endocrine disorder -- was given last rites three times before he turned 40.

Dallek, who has written respected biographies of Presidents Lyndon Johnson and Franklin Delano Roosevelt, said Kennedy was desperate to cover up his painful health woes -- along with the extensive medicine he regularly took.

"I think it would have stopped him from being elected," Dallek said.