By By Mark Caro, Chicago Tribune 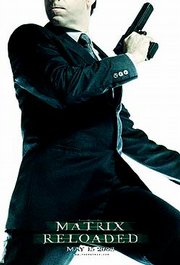 For all of its cosmic ideas and much-imitated special effects and kung fu moves, "The Matrix" (1999) was a relatively contained story about a man who plunges into a new world and discovers his great, innate powers. Neo (Keanu Reeves) was Alice down the rabbit hole, Dorothy out of Kansas, Luke Skywalker finding his destiny and Superman moving faster than a speeding bullet and leaping tall buildings in a single bound.

Although Neo has learned to fly like Superman in "The Matrix Reloaded," the new movie owes its greatest debt to the "Star Wars" series. Too bad this second trilogy entry is closer to "Attack of the Clones" than "The Empire Strikes Back."

"Reloaded" is filled with armies, assembled populations, space fleets and officials who debate pompously in council meetings and orate to the unwashed masses. The writing-directing Wachowski Brothers have taken the bigger-is-better rule for sequels to heart -- and stomach and every other available organ.

The new movie is bloated and sprawling where its predecessor was sleek and lean (even though at two hours and 18 minutes, "Reloaded" is just eight minutes longer than "The Matrix"). You thought Agent Smith (Hugo Weaving) was a fun, droll villain in the first one? How 'bout an ex-Agent Smith who can duplicate himself into a hundred Smiths this time?

People will see "The Matrix Reloaded" if only for a demonstration of what a megamillons budget and state-of-the-art special effects can buy. But although the technical aspects don't disappoint, the human ones do. Action scenes can't be heart-stopping if the story hasn't gotten your ticker going to begin with.

"The Matrix Reloaded" assumes its audience has entered the theater with a high level of emotional investment and complete retention of the first movie. Andy and Larry Wachowski don't feel the need to remind anyone of what the Matrix is ("the real world" as nothing more than a virtual-reality program constructed by enslaving machines) or to engage us in any of the characters anew.

The first movie's weak link, though, was Neo's love story with Trinity, the slinky, tough action woman played with ultracool allure by Carrie-Anne Moss. Now the Wachowskis count on them to supply the most charged passions of "Reloaded," throwing them into a Euro-slick love scene intercut with shots of the Zion natives stomping around at a sort of tribal rave.

It still doesn't take. Destiny may have drawn Neo and Trinity together, but you couldn't imagine them sustaining a five-minute conversation.

Because you experienced the first movie from Neo's point of view, Reeves' general blankness wasn't a liability; you projected yourself into his gaps. But the Neo of "Reloaded" is a more remote figure, an opaque superhero caught up in a plot that dwarfs him. An army of 250,000 nasty machines is burrowing toward the subterranean city of Zion, which, if you remember the first movie, is the Earth's only enclave of free people.

One of the human military leaders, Commander Lock (Harry Lennix), wants to assemble all available forces to fend off the invasion, but Morpheus, Neo's mentor again played by Laurence Fishburne (but with more George Lucas-inspired ponderousness), thinks the key to victory is Neo, a k a The One. Adding to the two leaders' tension: Lock's main squeeze is Niobe (Jada Pinkett Smith), a female officer who used to be romantically linked to Morpheus.

When this triangle is revealed early on, your reaction may be a stunned: Wait, this continuation of the most innovative action/science-fiction tale of our time is using that old plot device?

Likewise, the movie also includes a scene on Zion in which Link (Harold Perrineau), a new crew member of Morpheus' ship whom we've only just met, returns home to find that his wife Zee (Nona Gaye) is irritated that he's away from home so much. Why is this mundane scene here?

The movie's opening hour is filled with so much plot exposition and speechifying that you figure the Wachowskis have gotten lost amid their mythologies. Yes, their intellectual, existential probing is vital to the movies' lasting power, but in "The Matrix," the action scenes illuminated the themes. This movie's mind-warping concepts are discussed and discussed, with the action scenes providing relief as set pieces.

The movie gets going when the action finally moves from Zion back into the Matrix. The Wachowskis continue to make great use of their "Bullet-time" technique of integrating computer technology and 360-degree's worth of still photographs to speed up, slow down and circle around various combatants as they fly, spin, fire, kick or plummet.

The flying-from-wires martial-arts battles once again are choreographed by Hong Kong action veteran Yuen Wo Ping, who turns the human and virtual stunt people into hybrids of ballet dancers, acrobats and pinballs. In the most entertaining fight, an ever-twirling Neo wields a pole to turn the swarming Smiths into line drives and fly balls. But other hand-to-hand battles are samey and a bit slow; you can picture the actors running through their choreography instructions.

The scenes certainly don't make you catch your breath like Yuen's more imaginative work in "Crouching Tiger, Hidden Dragon" or "The Iron Monkey." Also, not to be a killjoy, but if Neo already has learned he can dodge or stop bullets, how could anyone lay a hand on him?

The grander-scale highway chase, with Trinity weaving a motorcycle through oncoming traffic and a sword-wielding Morpheus battling an Agent atop a speeding truck, is impressive in a car-flipping way, but it also never gets your pulse racing -- perhaps because you feel like it's nothing new.

"The Matrix" felt new, combining comic books, martial arts, metaphysics and cyber-science-fiction in a way you hadn't seen before. Now the Wachowskis are trying to extend their provocative arguments about people vs. machines and free will vs. preprogramming, but the effort has sucked the life out of their storytelling.

For such a rich visual movie, "Reloaded" tells far more than it shows; the pivotal scenes involve people explaining things to Neo. Too many plot turns resemble detours, and even the ever-amusing Smith feels like a red herring in the scheme of things.

"Reloaded" ends with a trailer for "The Matrix Revolutions," which opens in November, but, alas, the suspense is mostly virtual.