'The Matrix' gets 'Reloaded,' and there's more to come 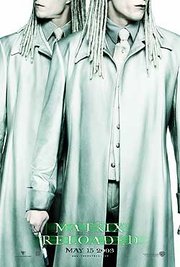 LOS ANGELES -- "At its heart, it's a love story," says Carrie-Anne Moss, who plays Trinity.
"At the core of it is the idea of what it really means to be human," says Keanu Reeves, who plays Neo.
"It's about choices," says Jada Pinkett Smith, who plays Niobe.

"It mixes Greek mythology, Eastern religion and kung fu, then comes up with something all its own that asks a crucial question: What's reality?" says Laurence Fishburne, who plays Morpheus.
"It's about mixing philosophy with passion," says producer Joel Silver.

"It's about going places movies have never gone before," says visual effects supervisor John Gaeta.
"You know, if you really want the deep questions answered, you'd have to talk to the brothers," says Reeves, after a grilling about "The Matrix Reloaded," the most anticipated movie of 2003. "And, of course, there's the riddle, because the brothers aren't talking."

The brothers -- Andy and Larry Wachowski -- are the holy oracles of "The Matrix Reloaded," its predecessor, 1999's "The Matrix" and its conclusion, "The Matrix Revolutions," to be released in November.

Once upon a time they were just Andy, who is 35, and Larry, 37, Chicago-born brothers who shared a love of movies, comic books and philosophical argument. After the release of "The Matrix," a film that took the movie industry and moviegoers by surprise with its breakthrough special effects and cult-like following, the brothers -- as they are now known -- have clammed up.

"They're just regular people -- smart as hell and completely focused -- but still regular people," says Pinkett Smith. "I mean, nobody treats them like they're Buddhas or anything, but these movies are their vision, and they want to protect that by not getting involved with stuff like this."

"Stuff like this" is a weekend on the Warner Bros. lot in Burbank, packed with interviews and parties and press conferences, all designed to launch "The Matrix Reloaded."

Even for cast and crew who have been given their own trailers in which to conduct interviews and chauffeur-driven Cadillac Escalades, just like the ones in the movie, to get around in, it's grueling work. But not nearly as grueling as the 270-day production on sound stages near Sydney, Australia, that yielded "Reloaded," "Revolutions" and footage for a video game called "Enter the Matrix."

Moss, whose Trinity is not only a high-flying, PVC-clad warrior but the love interest of Neo, broke her leg during training. She had to overcome what she calls a "morbid fear" of motorcycles for the 14-minute highway chase that serves as the film's climax. Reeves reinjured a wrist; Fishburne fractured an arm; Hugo Weaving, who played the villainous Agent Smith in the first film and returns as a computer virus, suffered a whiplash-like disc injury.

The production was also affected by death. An airplane crash took the life of singer Aaliyah, who had filmed a couple of scenes as a new character called Zee; she was replaced by another singer, Nona Gaye, daughter of Marvin. Gloria Foster, who played the Oracle in the original, died of natural causes during filming. She had almost completed her scenes in the sequel but had done nothing for the third film.

"Everything that could happen did," says Silver, the action-film producer ("Lethal Weapon," "Swordfish"). "But all the training was essential to making this movie what it was. Keanu hates for me to say this, but I swear he could take (Hong Kong action star) Jet Li one on one. He got that good. I mean, obviously, we all had a lot to live up to."

Unlocking the story
"The Matrix" is the story of Neo, a 21st-century computer programmer and hacker who has the feeling that something is not quite right with his life. This is confirmed when his computer orders him to "wake up," a command that leads him to Morpheus, the head of a group that has uncovered a remarkable secret: Reality, as we know it, isn't real.

Instead, it's a dream-state hallucination propagated by a computer program run by a race of machines that suck up human energy to stay running and in control. Neo, Morpheus has been told by the Oracle, is the messiah who can free all humans from this collective mind-wash by leading the struggle to smash the Matrix, which takes the form of sentient agents that track down "free" humans.
Or something like that.

"I'd be a liar if I told you I understood everything that was going on when I first read the script," says Reeves. "But I knew immediately I had never read anything like it and that I wanted to be part of it. I had no idea it would become what it has become, or even that we would make a sequel. I was just happy to be part of something that was so original and challenging."

Working with special-effects master John Gaeta, who would win an Academy Award, the Wachowskis invented an alternate reality in which Neo, Morpheus and Trinity could defy gravity and stop time.

Along with the breathless action sequences inspired by comic books, Japanese animation and Hong Kong martial-arts films, the brothers created a philosophical quilt of Eastern-style mysticism, Biblical references (especially to liberators like Moses, David and Jesus), cyber-fiction by such writers as Philip K. Dick and William Gibson, mathematical theory and Greek mythology.

"There's a reason my character is called Persephone," says Monica Bellucci. "In mythology, she's the daughter of Zeus, and she is lured to the underworld by Hades. She's very seductive, but she has lots of anger."

In "The Matrix Reloaded," Persephone is the wife of a Frenchman who controls a character called the Keymaker; on his ring is a key to a back door of the Matrix that if unlocked would allow Neo into the very guts of the machine. Bellucci has less than 5 minutes of screen time in "Reloaded," and she says her appearance in "Revolutions" is similarly brief.

"But the character is delicious, and I do have that kiss with Keanu," she says of one of the many choices that Neo must make to save humankind. "So I dropped everything to be part of this enormous, ambitious thing. It's such a wonderful mix of spectacle and intimacy, with this religious theme that I found fascinating."

The ratings controversy
"The mind, the body and the spirit," says Fishburne. "The movie is equally concerned with all three. How many movies can you say that about?"

It's the body part, apparently, that earned "The Matrix Reloaded" its R rating, for a scene in which Trinity and Neo make love. Though the scene is shot to minimize nudity, it and some easily excised language and violence are what lies between the R and the more financially lucrative PG-13.

"You can mow down a thousand people with guns and get a PG-13, but hit somebody in the face, that's an R," says Silver. "I've been through it a million times, and it's all so arbitrary."

But just as the Wachowskis had it written into their contract that they were not obligated to do press, they were also clear about their need for an R rating.

"I don't think it's because they wanted to do anything earth-shattering," says Silver. "They just wanted the freedom to make these films the way they wanted. And we gave them that freedom. This is the movie they wanted to make."

The brothers developed effects that have never been seen on screen, most notably in an extended sequence referred to as the Burly Brawl. Neo first fights Smith, then eight Smiths, then 24, then 100. This, says Gaeta, meant creating computer-generated characters in a computer-created environment that had to be seamlessly blended with footage of actors doing their own stunts.

In essence, says Gaeta, the machine becomes human-like, paralleling what happens in the film.

"It was very important to the brothers that I actually ride the motorcycle and that Larry actually be fighting on top of a moving truck," says Moss of the freeway scene, which may have been the most labor-intensive of all the action scenes. It took 45 days to shoot, Reeves said, on two miles of freeway specifically built to resemble Los Angeles' 101.

"I see the film now and it's difficult for me to discern between what was filmed live and what was created in the computers," says Reeves. "I think the average audience will be so caught up in the story, they won't even be trying to figure out what's physically, tactile real and what isn't."

To make the point, some interviews were conducted on a sound stage in which the sets for the underground city of Zion, the refuge of the last free humans, had been re-erected. Some are beautifully executed miniatures, some are full-sized and some never existed anywhere outside a software program.
"I've been saying we didn't just raise the bar, we broke it," says Silver. "And that makes everybody crazy, because there's even more to blow your mind in 'Revolutions.'"

"You can't imagine what happens next," says Reeves -- who, like everyone else involved, is mum as to how the story ends. "But I will say this: There's no going back to this story. With 'Revolutions,' it's over, and you'll know why when you see it.

"The Matrix is the prison of the mind," says Silver. "In 'Revolutions,' we open the gate."