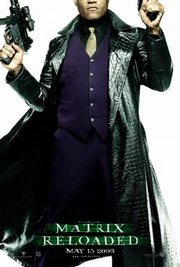 Morpheus, Neo and Trinity come striding into a hoity-toity French restaurant, looking for trouble and dressed like the Three Horsemen of the Apocalypse: Leather, Latex and Lycra. They have come to see a simpering French twit named Merovingian (Lambert Wilson), the perfect heavy for our Freedom Fry-loving times. He lectures them lengthily about power, truth and "causality."

"Choice is an illusion," Merovingian declares. And with a final imperious harrumph, he adds, "Causality. There is no escape from it."

Bad dialogue, there is no mistaking it.

What is wonderful about this moment in "Reloaded" is that it restores the sly sense of humor of the original "Matrix," to which this is the eagerly awaited sequel. Until Merovingian and his twin albino bodyguards arrive to make mock, we are stuck with the ceaseless philosophical warblings of Morpheus (Laurence Fishburne) and an assortment of ponderous gasbags dressed in bathrobes.

For most of the movie's first hour, the latest installment of the "Matrix" saga feels as if it has come down with "Star Wars" disease. Symptoms include characters who talk to each other as if they weren't having the most boring conversation ever recorded, and the appearance of elderly actors dressed in flowing togas like Roman senators.

In "The Matrix Reloaded," these sages are called "councillors," and they roam the subterranean city of Zion, threatening to end life on Earth with their stupefyingly dull dialogue. After Morpheus delivers Neo (Keanu Reeves) and Trinity (Carrie-Anne Moss) back to Zion, Neo has trouble sleeping, apparently worried about the 250,000 machine sentinels burrowing toward Zion to eradicate what remains of humanity. (In the first picture, we learned that humans have been enslaved in a vast computer simulation of life called the Matrix.) Then he has a talk with Councillor Hamann (Anthony Zerbe) about mechanization, about truth, about causality.
"When I look at these machines, I can't help thinking we're plugged into them," the councillor observes windily. "It makes one wonder, what is control?"

This goes on for a while. It makes one wonder when the fun is going to begin.

Neo is now fully ordained in the ministry of his own One-ness and wears his billowing black cassock like a monk at a slightly kinky seminary. With his hair oiled and his dark glasses in place, he is no longer the charming Neo-phyte of the first movie.

What were once mere parallels between Neo and Jesus are presented in "Reloaded" with the thudding weight of biblical parables. When Neo returns to Zion, he is met at the city gates by the lame and the halt, and dispenses miracles as Jesus did in Jerusalem. Neo has accepted his own divinity, but he's still waiting uneasily for someone to tell him how to put his new super powers to use. "I just wish I knew what I'm supposed to do," he tells Trinity.

Zion turns out to be a radiantly diverse city, a multicultural mosh pit over which Morpheus looms, bare-chested, like a rock star. The knowing hipster of the first movie -- Fishburne's performance was like watching Miles Davis play the Cheshire Cat -- is gone. He has been replaced by someone who sounds like Obi-Wan Kenobi on a Leni Riefenstahl IV drip. Every word out of his mouth sounds as if it should have quotation marks around it.

Writer-directors Larry and Andy Wachowski seem determined to make everything about their story more meaningful in the wake of the first installment's blockbuster success. This picture never accumulates the sense of shared adventure that the first one did, and though the special effects are even better than before, they cannot be new twice.

The kung fu fights have taken on the rigid formality of Noh theater, and Neo's big brawl with 100 Agent Smiths (Hugo Weaving and 99 computer-generated clones) has the slightly desperate feel of a special-effects stunt for its own sake.

There is also an enormous freeway chase that feels like an old Burt Reynolds movie breaking out in the middle of "Crouching Tiger, Hidden Dragon." The sequence goes on for nearly 15 minutes -- almost as long as one of the Wachowskis' speeches on causality -- and it's a blast. But like many of the best scenes in "The Matrix Reloaded," what it has to do with anything else in the movie isn't entirely clear.