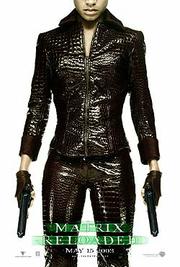 Virtual reality has come a long way since 1999, when "The Matrix" first infused quasi-philosophy with outrageously stylized action. That monster hit came wrapped in ribbons of emerald-green computer code that governed the lives of a determined band of resistance fighters clad in awesome black-leather dusters.
It had the look, it had the moves.

The sequel blows all that away.

In "The Matrix Reloaded," which opens with screenings on Wednesday at 10 p.m., the philosophy is even less plausible. But the action -- oh, the action! There's nothing else out there like it.

The brothers Andy and Larry Wachowski, who wrote and directed the film, deliver thunderous fight and chase sequences with unprecedented visual clarity. The best of these slaps Carrie-Ann Moss on a motorcycle going full-tilt against a six-lane highway full of oncoming traffic.

Even the smallest altercation brims with wit, style and precision.

But first, a word about the humans.

Keanu Reeves is back as Neo, a Christ-like figure whose burden of saving humankind weighs heavily on his well-defined deltoids.

In the first movie, Neo thought he was just an ordinary computer hacker with a boring day job. But no, Morpheus (Laurence Fishburne) picked him out as "The One" whose destiny is to free humanity from its virtual-reality prison, an overarching computer code known as the Matrix.

As "Reloaded" begins, Neo looks like a black-robed monk at peace with his powers. He can float atop the clouds while "doing his Superman thing," and he can fight off multitudes while nearly frozen in air, cloak billowing.

Neo and Trinity (Moss) are an item, the battle between free will and the Matrix continues, Morpheus has been brushing up on his rhetoric and all's right with the world -- as right as possible when reality isn't all it's cracked up to be.

The details hardly matter. Explanations involve such faux-Zen pronouncements as: "Some things never change, and some things do" and "The only way to get there is to get there."

The only salient detail you need to know is that the villainous Agent Smith (Hugo Weaving) is back, copying and pasting himself into the program so zealously that there are multitudes of him piling on Neo in a concrete schoolyard or chasing him down overlit corridors and crash-laden freeways.

These endless Smiths pop up many times, video-game style, as Neo and his crew try to prevent their homeland of Zion -- a vertical hive of orgasmic Cirque du Soleil activity -- from getting hit by a cosmic delete key.
You'll have to get past ponderous proclamations that add nothing to dorm-room discussions of being and nothingness. You'll inhale microscopic particles of meaningless religious references. You'll cringe at the series' abiding belief in the charlatan craft of spoon-bending.

And you'll hate the ending. It's a cop-out if ever there was one.

That the third installment in the trilogy is coming Nov. 5 is a poor reason to withhold the pay-off ticket-buyers expect.

But you'll forgive it all in the wake of those signature "Bullet Time" sequences in which the action is slowed down, yet enriched and textured by sophisticated camera technique and computer assistance. The actors do many of their stunts themselves, aided by wire-work and masterful kung-fu choreography.

Early in the movie, Morpheus warns a new character that he's got to have faith. All things considered, "The Matrix Reloaded" justifies that faith.