The Matrix :: Where to find the hardware to pull off sci-fi's coolest look 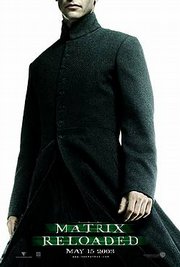 "The Matrix" style is urban armor, and it's "the" hot look for fall on the fashion runways. But if you don't want to pony up to the designers, that's OK: The components can be found in sporting goods stores, motorcycle shops, even those emporiums that sell sex toys and sleazy clothing. Our personal shopping guide to "The Matrix" look will give you a head start.

The character: Neo (Keanu Reeves)
Ensemble: Mandarin collar, long black coat, form-fitting black lycra T-shirt, black pants, harness belt and motocross boots.
Crucial detail: The coat's high side-slits allowed it to spread like wings when Neo was doing his balletic fighting. It made his earthbound, boot-heavy look take flight.
Important accessories: The almost frameless, insect-eye sunglasses.
Where to find it: The sunglasses are at the trendy kiosks that populate most malls. Motocross boots (albeit heavily emblazoned with logos) are available at some motorcycle dealers. Harness belts can be found at sporting goods stores that sell climbing gear. The signature coat, however, will have to be custom-made. A custom tailor in Nepal recognizes the allure of this garment and offers a made-to-measure, pure wool version for $462, www.baronboutique.

The character: Trinity (Carrie-Anne Moss)
Ensemble: The directors wanted her to look like an oil slick, says the film's costume designer, Kym Barrett, so Moss was poured head-to-ankle into polyvinyl chloride -- you might know it simply as vinyl.
Crucial detail: Even in the dark, the black plastic clothing glistens: her pants, her tank top, her short cropped jacket -- it's all PVC.
Important accessories: Sunglasses and a gun.
Where to find it: It is out there, but the neighborhoods are quite dicey. For the most demure of the decadent locations, try www.baroness.com.There, heavy-gauge vinyl leggings are priced $270. Pair them with a high-neck, long-sleeved black top ($205); the combination makes a very convincing Trinity outfit.

The character: Morpheus (Laurence Fishburne)
Ensemble: A long, reptilian textured dark coat, very similar to Neo's, over a dark three-piece suit.
Crucial detail: Attitude; Morpheus has it by the bucketful.
Important accessories: Pince-nez sunglasses (they have no side pieces and are held on by spring action in the nosepiece) and custom-made purple alligator boots.
Where to find it: They're everywhere trendy sunglasses are sold, including the Internet. Most styles sell for under $50.

The character: Niobe (Jada Pinkett Smith)
Ensemble: Burgundy, faux alligator-hide jacket and fingerless burgundy gloves.
Crucial detail: It's vinyl, not reptile.
Important accessories: The sunglasses, natch, and an unfortunate hairdo that looks very much like so many foamy pink hair curlers.
Where to find it: A similar look can be found at www.findcoolclothes.com. There, a buckle neck, pucker-pleather-front (fake leather) jacket with sweater sleeves and back panel sells for $69.95.

The character: Persephone (Monica Bellucci)
Ensemble: Barrett designed the character as an "evil-in-rubber Snow White." The frock was a custom-made, shapely, low-cut, iridescent, transluscent, sleeveless "business suit" that fit like kielbasa casing.
Crucial detail: It takes a body with more curves than the Snake River to pull off this look.
Important accessories: A personal trainer.
Where to find it: The closest thing we could find off the Internet rack was a lycra, wet-look, ivory mini cocktail dress, $69 at www.leatherheat.com.