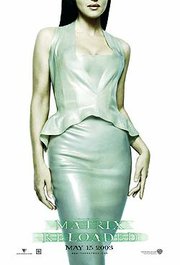 There's a moment in "The Matrix Reloaded" when rogue Agent Smith (Hugo Weaving) realizes the dozens of personal clones he has created aren't enough to defeat the heroic Neo (Keanu Reeves).

"More!" the stone-faced villain howls, summoning a hundred or so new copies of himself to the epic battle.

One can picture Andy and Larry Wachowski, the writing-directing team behind the "Matrix" franchise, constantly uttering this same word while crafting the sequels.

"The Matrix Reloaded" is all about "more." There are more fights, more special effects, more characters, more dialogue ... and the plot is way more complicated.

As one protagonist puts it: "What do all men with power want? More power."

Undoubtedly, "Reloaded" is a visually distinctive masterpiece of action/sci-fi/martial arts choreography. The multiple Smiths brawl and numerous other set pieces - including an astonishing freeway chase - give fans of the series their respective money's worth. Nobody will accuse the Wachowski brothers of leaving any of their $127 million budget on the cutting-room floor.

But it's often a chore to reach these adrenaline moments. This sequel is obsessed with council meetings, speeches, negotiations and lectures. Every new character in the film provides cryptic analysis of the "story so far" - conversations more befitting a James Bond nemesis who is unveiling his scheme before stranding the secret agent in an elaborate death trap.

This narrative quicksand is particularly noticeable during an impotent first act that fails to capture the magic of the oft-imitated original's "bullet-time" opening.

Here's the setup: Neo's power is increasing, but so too is the computerized invaders' threat to Earth's survivors. A quarter million Sentinels are burrowing toward Zion, the only remaining human outpost. Neo, Trinity (Carrie-Anne Moss) and Morpheus (Laurence Fishburne) decide to return to the Matrix with a many-tiered plan that will shut down the mainframe for good and finally rid the planet of its mechanized oppressors.

The trio's quest introduces them to new players in the expanding universe, including an elitist Frenchman (what are the odds?) called the Merovingian (Lambert Wilson), his seductive wife Persephone (Monica Bellucci) and their personal bodyguards whose abilities mimic those of ghosts, vampires and werewolves. (Note: This is all rationalized during one of the numerous speeches.)

Meanwhile, hostile Agent Smith has become something of a free agent, operating for his own revenge-oriented reasons rather than to serve the greater good of the system.

In the four years since the original's release, "The Matrix" has developed into a cult property, a la "Star Trek," where loyal viewers find great meaning in the subtext and allegories. Parallels ranging from "Alice in Wonderland" to the Biblical saga of Jesus have been interpreted within the flick.

All this philosophical/metaphysical rambling doesn't alter the fact that this latest "Matrix" is a visual movie, pure and simple. In that respect, "Reloaded" triumphs, with blinding duels and breakneck pursuits that are spectacular in their design. The Wachowskis take great care envisioning the texture of this illusionary world, from the Ellis Island-meets-"Blade Runner" look of the subterranean Zion to the faux opulence of the Merovingian's pad.

Yet when the picture attempts to go beyond the eye-candy, it veers from boring to downright silly.

This is exemplified by the film's most embarrassing moment, when Trinity and Neo share a spot of lovemaking while images of a Zionist dance party are intercut between thrusts. The camera lingers on slow-motion shots of writhing extras grooving to tribalized techno music. The scene culminates with the exposure of Keanu's butt.

It's always tough to judge the middle part of a trilogy before having seen the third portion. (Few remember that "The Empire Strikes Back" was contemporarily criticized as a deeply unsatisfying film, whereas, in retrospect, it's considered the standout.) Like "Empire" or "The Two Towers," the movie has that difficult task of being a bridge between beginning and end.

Hopefully, "The Matrix Revolutions," which hits theaters in November, will provide some closure. Perhaps then the enigmatic secrets behind Neo's computerized experience will be enjoyably unlocked. Maybe all of this sequel's earnest orations will result in a grand sense of meaning for those who treat the series like dorm room Scientology.

And maybe "Reloaded" is just a diverting piece of pop entertainment that has utilized the enormous talent and budget at its disposal to craft a futuristic thrill ride ... no more and no less.