Nashville, Tenn. — June Carter Cash, the Grammy-winning scion of one of country music's pioneering families and the wife of country giant Johnny Cash, died Thursday of complications from heart surgery. She was 73.

She died at a hospital with her husband of 35 years and family members at her bedside, manager Lou Robin said. She had been critically ill after a May 7 surgery to replace a heart valve. 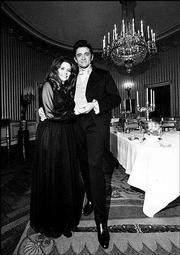 June Carter Cash and her husband, Johnny Cash, stand in the Blue Room of the White House after an April 17, 1970, practice session. June Carter Cash died Thursday of complications from heart surgery at age 73.

A singer, songwriter, musician, actress and author, June Carter Cash performed with her husband on record and on stage, doing songs like "Jackson" and "If I Were a Carpenter," which won Grammy awards in 1967 and 1970, respectively. Their duets included "It Ain't Me Babe" in 1964 and "If I Had a Hammer" in 1972.

"People talk about Loretta Lynn and Tammy Wynette when it comes to pioneering women in country music. But they very seldom mention June, somewhat because she got married to Johnny Cash," said Ed Benson, executive director of the Country Music Assn. "I think people should think of her more often when they think of the pioneering women in country music."

She was co-writer of her husband's 1963 hit "Ring of Fire," which was about falling in love with Cash. In his 1997 autobiography, Johnny Cash described how his wife stuck with him through his years of amphetamine abuse.

"June said she knew me -- knew the kernel of me, deep inside, beneath the drugs and deceit and despair and anger and selfishness, and knew my loneliness," he wrote. "She said she could help me. ... If she found my pills, she flushed them down the toilet. And find them she did; she searched for them, relentlessly."

June Carter was born June 23, 1929, in Maces Spring, Va. Her mother, Maybelle Carter, was in the Carter Family music act with her cousin Sara Carter and Sara's husband, A.P. Carter. In 1927, they made what are among the first country music recordings.

The family act broke up, but mother and daughters June, Helen and Anita continued on as Mother Maybelle & the Carter Sisters, with little June playing autoharp.

In the late 1950s, after her marriage to country singer Carl Smith broke up, June Carter moved to New York to study acting. In 1961, she turned down an offer to work on a variety show that had Woody Allen as one of the writers, agreeing instead to tour with Johnny Cash for $500 a week. They married in 1968.

In 1999, she released an acoustic album, "Press On," that amounted to a musical autobiography and won her another Grammy. The album, her first in a quarter-century, followed her career from its beginning through her marriage with Cash.

Johnny and June Carter Cash had a son, John Carter Cash, in 1970. She was also the mother of country singer Carlene Carter, whose father was Smith.