A phenomenal shooter, although short.

Infogrames (now just Atari) has been putting some great software out lately. Ikaruga continues the trend with tight and innovative shooting mechanics that boggle and dazzle, but is over way too soon. 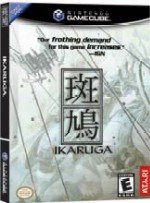 Ikaruga is reminiscent of top-down shooters like Radiant Silvergun or Axelay, except it's much better. The most innovative aspect of the gameplay is how your immediate survival depends on switching your ship's polarity most of the time.

You have white bad guys and black bad guys. When the black ships shoot at you, you need to switch to the black polarity to absorb their fire. When the white ships shoot, you switch to white. When you absorb the gunfire, a special meter fills up. When it is full you can unleash a berserk attack.

To add to the challenge, your white bullets hurt black enemies more and vice versa. So the whole time you must choose between dodging tons (and I mean tons) of opposite polarity fire or taking a bit longer to defeat enemies with the same polarity gunfire.

This game is hard. Even on the easiest setting it's a challenge. On the hardest difficulty, enemy ships explode into 50 bullets each, making it near impossible to dodge everything. However, once you master the patterns, the game only lasts about two hours max. Yeah. Bummer.

The graphics and sound are like those supporting cast members that will never be real stars. They get the job done and are reliable, but they're nothing to write home about. The graphics are intense and not safe for epileptics, but aren't too colorful. But the speed alone give the graphics a high mark. The sound is generically placed, again with nothing to speak too highly of.

The graphics get the job done with a total buttload of things going on at once.

The only chance of replay value this has is cooperative mode with a friend, but once you master it playing by yourself, there is little reason to return.

But the bread and butter is the harcore shooting with a twist and a welcome challenge. This is truly a shooter for the shooter fan.