New York — Wayne Brady, who took over Rosie O'Donnell's time slot across much of the country and her role as a breezy entertainer, won two Daytime Emmys for his rookie talk show Friday. 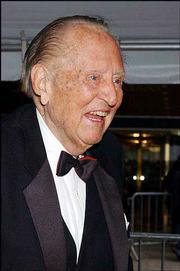 "I'm still the new kid on the block doing this daytime show," he said. "We're just trying to make good TV. I stumbled onto something wonderful."

In the soap opera world, daytime diva Susan Flannery of "The Bold and the Beautiful" won best actress for the third time in four years. Maurice Benard of "General Hospital" won his first best actor trophy.

"I'm beginning to feel like Miss Piggy. ... This is an embarrassment of riches," Flannery said.

"As the World Turns" won its fourth award as best daytime drama.

The Daytime Emmys, held at Radio City Music Hall, expanded to three hours for the first time on its 30th anniversary. Brady was the host.

Shut out for the night was Dr. Phil McGraw, Oprah Winfrey's protege whose blunt tough love was a daytime sensation. Brady had joked that even his 3-month-old daughter predicted McGraw would win.

"I think we've shown, day after day, you can have women on who can argue, who can laugh, who can disagree," Walters said. "It's the way women are all across the country."

After PBS' "Reading Rainbow" was named best children's series for the seventh time, executive producer LeVar Burton pleaded for its survival. He said it might be the show's last year if more funding wasn't found.

"If you are a wealthy philanthropist out there, I'm not that difficult to find," Burton said.

"Sesame Street" was named best preschool children's series. The PBS show has won that category all nine years it has been awarded, and a staggering 86 Emmys since its debut in 1969.

Vanessa Marcil of "General Hospital" and Benjamin Hendrickson of "As the World Turns" both won their first supporting actor trophies. The balding Hendrickson said he always believed his award went to the actor with the best hair.

"To my mom, who scrimped and saved to send me to Juilliard to study the classics, I'm sorry," he joked. "But I know you're happy about this."

Jordi Vilasuso of "The Guiding Light" and Jennifer Finnigan of "The Bold and the Beautiful" were named outstanding younger actors in soaps. Finnigan had trouble with her flimsy dress as she strode to the stage.

"I'm flashing all of America," she said nervously.

The Emmys also paid tribute to Fred Rogers, host of "Mr. Rogers' Neighborhood," who died of cancer in August. Art Linkletter, who charmed a generation by letting children speak their minds on TV, was honored with a lifetime achievement award.