Cambridge, Mass. — It was 20 years ago that Niall Ferguson first stuck his neck out for the British Empire. He spoke at the Oxford Union, the debating society where Great Britain's budding politicians try to make their careers.

But Ferguson, then a shaggy-haired Scottish undergraduate who liked both punk rock and Margaret Thatcher, didn't make his political career that night; he broke it. Left-leaning Oxford students despised Thatcher and viewed their country's imperial past with embarrassment. Ferguson flopped. 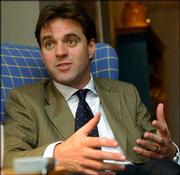 Historian and author Niall Ferguson talks about his new book, "Empire," during an intetrview in Cambridge, Mass. "Empire," a follow-up to a television series that drew 2.5 million viewers in Great Britain, is a spirited defense of Britain's record as an imperial power.

"There was this strange impulse to provoke, which ran ahead of my intellectual capabilities," Ferguson said in a recent interview. "I guess I knew I was getting into stormy waters, and I pushed my vessel straight into the eye of the storm."

These days, the impulse to provoke remains, but Ferguson's views are less easily dismissed. After failing to find fame in politics or by playing double bass in a rock band, Ferguson has become one of Britain's most controversial but recognizable historians, a public intellectual with a sharp pen, the voice and looks of a television star, and a wardrobe as fashionable as some of his views are not.

Now, after writing several popular books on economic history, Ferguson has returned his gaze to the topic that first got him in trouble. His new book, "Empire," is a follow-up to a television series that drew 2.5 million viewers in Great Britain.

The book is a spirited defense of Britain's imperial record, but it also is aimed at Americans. His publisher even added the phrase "Lessons for Global Power" to the American version's subtitle.

The United States is wary of empire, but Ferguson argues it has become an informal one nonetheless.

"I think Americans are strangely oblivious to the precedents for these imperial activities, and not only oblivious, they're in denial," said Ferguson, a professor at Oxford and New York University.

But he says there are lessons from Britain's imperial experience -- including the 1918 invasion of Iraq -- that Americans had best start learning, notably the importance of letting civilians rather than generals run the show.

If done well, Ferguson argues, imperial influence need not be bad. "Empire" forcibly argues that on balance, Britain's did more good than harm.

He acknowledges the damage to native cultures wrought by the early British Empire, and its complicity in the early slave trade, though Britain later fought it. And yes, the empire was negligent, even culpable, in famines in Ireland and India.

But Ferguson sees the later empire -- when it controlled a quarter of the Earth's surface and population in the late-19th and early-20th centuries -- as a vehicle of progress, spreading free trade, investment, education and remarkably uncorrupt government. And he sees its eventual demise as a noble sacrifice offered to ensure the defeat of the malevolent empires of Germany and Japan.

Critics contend Ferguson emphasizes economics over human beings, and that the real legacy of the British Empire was racism and oppression. Many are clearly bothered by the attention Ferguson's interpretation has received.

"Just as Riefenstahl's photography glorified the violence of fascism and sold it to the middle classes, Ferguson ... presents the acceptable face of imperial brutality," Wilson wrote.

Ferguson's response: Such attacks from "a self-perpetuating academic elite" don't stand up against the research he's done about the empire's global economic impact.

"I think that's the thing that makes the book perhaps refreshing from a historian's point of view," he said. "It takes the economics literature and says, 'This actually really changes the way we should think about the history, much more than any of the scholarship being done by scholars of imperial history, because they don't read that stuff."'

"Empire" is the 39-year-old Ferguson's seventh major book; most have been far denser tomes. Harvard University economic historian David Landes, a longtime friend, calls Ferguson a "phenomenon" for his productivity and ability to synthesize big ideas.

"That's his gift," Landes said. "He writes in an extremely lively fashion that grabs the attention. The result is that I think he's a kind of maker-of-classics at a very early age."

Ferguson, who is being courted by Harvard, plans to return to micro, financial history. At the moment, though, he's busy both promoting "Empire" and trying to fend off the attacks.