'Sage of Concord' was born 200 years ago this spring

Concord, Mass. — Concord is a town for walking, for circling the narrow trail around Walden Pond, or stepping past the graves of Sleepy Hollow, or loafing along the landmarks of Monument Square, with its pillared churches and flat-brick civic hall.

Great writers have lived here -- Nathaniel Hawthorne, Henry David Thoreau, Louisa May Alcott -- and something about the town, founded in 1635, still startles the mind. Just as time compresses from the awareness that on foot you can cover much of Concord within a day, it expands into infinity as you stand before the silent -- and silencing -- waters of Walden. 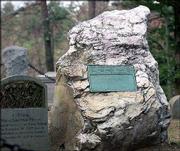 THE ROUGH-HEWN HEADSTONE over the grave of Ralph Waldo Emerson, right, sits next to that of his second wife, Lidian, in the Sleepy Hollow Cemetery in Concord, Mass. Emerson, the famed American essayist, was born 200 years ago this spring.

One townsman, a native Bostonian and a most devoted walker, found in Concord an escape from "the compliances and imitations of city society." In Ralph Waldo Emerson, the town claimed both a loyal neighbor and a spokesman for the nation.

Born 200 years ago this spring, he remains the so-called Sage of Concord, his likeness -- an imposing white marble statue -- presiding over the common reading area of the public library, his bulky granite headstone a colossus among the tidier memorials in Sleepy Hollow.

Emerson moved here in 1834 and was soon invited to be keynote speaker at Concord's bicentennial. As he became famous, he remained true to his adopted home, even serving as a volunteer firefighter. Decades later, when fire badly damaged his house, the town raised money so he could travel while repairs were completed and then welcomed him back as a hero.

"Telegraphs were sent as soon as his ship docked," says David Wood, curator of the Concord Museum, across the road from the Emerson house. "Children sang for him as he arrived on the train. There was an honorary procession from the train to his house."

'Hitch your wagon to a star'

The fields and woods served as a kind of muse for Emerson, an unofficial study, but the actual work took place in the parlor of his white, squarish Georgian mansion -- from the seat of his rocking chair as he faced a window looking out on fellow walkers.

"Visitors now are struck by the fact that he did all his work at home," says Emerson's great-great-granddaughter, Bay Bancroft, who administers the house, which receives thousands of tourists each year, and his literary estate and is undeniably a blood descendent, with her strong nose, slender mouth and deep, wide-set eyes.

"He was a public intellectual, but also a very home-based intellectual, which was more common in the 19th century. He worked while surrounded by the normal chaos of family life. And his house was also a real magnet for scholars and intellectuals and politicians."

Their photographs fill the house, famous friends such as Alcott and Thoreau, who lived there for months and popped corn for Emerson's children. In one upstairs stairway, pictures of Abraham Lincoln, Ulysses Grant and poet Alfred, Lord Tennyson adorn the walls.

Emerson is secure in the American canon, although his role today is not easily defined. Wood says he is frequently asked why Emerson still matters, and Wood struggles to answer. Emerson stands for a less cynical, more demanding time, for the uplifting New England mind-set that insisted all could change for the better.

"You can't point to any institution, or movement these days and say it was inspired by Emerson," Wood says. "What I want to say, but bite my tongue, is that the way to understand Emerson is through reading Emerson."

Emerson's highest art was the essay, memorable phrase stacked upon memorable phrase as if each were an essay itself. Aphorisms like "hitch your wagon to a star" and "a foolish consistency is the hobgoblin of little minds" are still endlessly, irresistibly quoted.

"His essays are really performances. They're crystallizations, many of them, of public lectures. Eloquence is integral to the art of speaking and eloquence was essential to every Emerson project," says Lawrence Buell, a professor of English at Harvard University and author of "Emerson."

Emerson's most notable works include "Experience," with its lament that "so much of our time is preparation, so much is routine"; "Nature," in which he declared "nature is the incarnation of thought"; and "Self-Reliance," which became a manifesto of individual power.

"To believe your own thought, to believe that what is true for you in your private heart is true for all men -- that is genius," he wrote.

Models, even archetypes, of democratic thought, his essays dramatize the debating, changing mind. One line sets off another and then another -- the pre-digital version of links on a Web page.

"I am only an experimenter," he writes in "Circles," one of his most important essays. "No facts are to me sacred; none are profane; I simply experiment, an endless seeker, with no Past at my back."

"People think of Emerson's essays as dull; they should read 'Circles,"' says essayist and fiction writer Annie Dillard, who wrote about Emerson's work in "Living by Fiction."

Emerson's influence is simultaneously vast and limited. He is often taught, but rarely mimicked. Robert Atwan, who since 1986 has edited Houghton Mifflin's annual series of the "Best American Essays," believes Emerson's greatest impact was not in prose, but in poetry.

"Emerson is a highly metaphysical writer. He has a gift for imagery, and that kind of transcendental world. That was a world conducive to American poetry. Robert Frost said he carried a copy of Emerson's work wherever he went," Atwan says.

Emerson, a pastor's son, was born in Boston on May 25, 1803. The fourth of eight children, he was 7 when his father died. With his mother often busy, his most important caretaker became his aunt, Mary Moody Emerson, a lifelong influence. Four feet tall and fearless, Emerson's aunt was a thinker so uncensored that when she died, an obituary writer observed she "was thought to have the power of saying more disagreeable things in half an hour than any person living."

Young Emerson wrote poetry in grade school and kept a journal while at Harvard of his "luckless ragamuffin ideas." He won prizes for oratory, philosophy and essays on Socrates, and he even delivered the class graduation poem -- after six others declined.

He briefly taught at a "school for young ladies," attended Harvard Divinity School and was ordained in 1829 as junior minister at the Second Unitarian Church in Boston.

He was popular with the congregation, but a preacher who likens the prayers of his church to "the zodiac of Denderah" is not long for his calling. Emerson decided that to be a good minister, he had to leave the ministry. He quit in 1832.

Emerson soon established himself as an essayist and for much of his life he lived off the fruits of his mind -- speaking, writing, publishing. He helped found Dial magazine, which published Thoreau, Margaret Fuller and other leading thinkers. He traveled for weeks and months at a time, greeted by shouts and laughter -- and some jeers, too -- as he lectured throughout the country.

Bored by the classroom, bound by the church, Emerson found community in Transcendentalism, a classic expression of American idealism. While the Puritans thought all to be lowly sinners, the Transcendentalists believed all were potential gods, each mind partaking of the "Universal Mind." It was a movement close to the Sufi faith, asserting that one could physically experience the eternal spirit.

"Let me admonish you to go alone; to refuse the good models, even those which are sacred to the imagination of men, and dare to love God without mediator or veil," Emerson once wrote.

He revered, even symbolized, the solitary thinker. But not at the expense of public matters. Ideas were to be shared, and Emerson engaged in the issues of his day. He supported women's suffrage, attacked slavery as a "special and aggressive evil" and praised abolitionist John Brown, pronouncing that his hanging made "the gallows as glorious as the cross."

"There goes in the world a notion, that the scholar should be a recluse, a valetudinarian -- as unfit for any handiwork or public labor, as a penknife for an ax," he said during his famed "American Scholar" commencement speech, given at Harvard in 1838.

"Inaction is cowardice, but there can be no scholar without the heroic mind. The preamble of thought, the transition through which it passes from the unconscious to the conscious, is action."