A threatened boycott seeks to force telecommunications company MCI to dump Glover as its pitchman because of views he expressed about Cuba and against the Iraq war.

"Lethal Weapon" star Danny Glover, center, takes part in a March 19 antiwar protest in San Francisco. Glover is the target of a threatened boycott by the conservative public interest group Judicial Watch, which seeks to force telecommunications giant MCI to dump him as its pitchman because of his expressed views on Cuba and against the Iraq war.

Similar frostiness was extended to the Dixie Chicks and actors Sean Penn, Tim Robbins and Susan Sarandon when they came out against war in Iraq. Glover said this chill came from right-wing factions that he denounced as self-appointed thought police.

"It's basically this rabid nationalism that has its own kind of potential of being maniacal, in some sense. As we march down and wave the flags, we must be sure of what we're waving them for," Glover said in an interview.

"The whole idea is to crush any kind of dissent," he said. "Something is happening now that is very dark and very sinister in this country, and for us to not admit it is happening is, in some ways, for us to be blind."

There is so much concern about this in Hollywood that in March -- before the fighting even began -- the Screen Actors Guild issued a statement warning studio executives not to deny work to entertainers who spoke against war in Iraq.

"Even a hint of the blacklist must never again be tolerated in this nation," the union said.

Attacks on the wallets and credibility of people who speak out against U.S. policies are nothing new. It happened during World War I and most notably in the 1950s, when many a Hollywood career perished before Sen. Joseph McCarthy's communist-hunting investigations subcommittee.

Free speech experts say this latest round of attacks does not rise to the level of McCarthyism or celebrity blacklisting, but it may lead to that if left unchecked -- particularly now that the United States is embarking on new foreign policy doctrines such as pre-emptive military action in the name of fighting terrorism.

"We are at an important point in our history, and we need a serious, open debate about it," said David Kairys, constitutional law professor at Temple University. 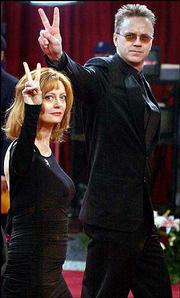 Susan Sarandon and her partner, Tim Robbins, flash the peace sign as they arrive for the 75th-annual Academy Awards. They're among celebrities under fire for their antiwar views.

"Criticizing Danny Glover, or wishing all sorts of ill fortune to him, would be counterproductive. The way to counter this is for more and more people to stand up ... in an atmosphere where people can express their views and not be afraid they're going to lose their jobs."

In Glover's case, it was not just his antiwar activism that drew the wrath of the right. It also was his signature on a two-paragraph statement from 160 artists and intellectuals that appeared May 1 in the Cuban government newspaper Granma.

That statement, addressed to "The Conscience of the World," called the Iraq war an unprovoked, unjustified invasion and said there was "a strong campaign of destabilization" against Cuba that could be used as "a pretext for an invasion" much like that launched against Iraq.

That second portion was seen by some conservatives as favorable to Fidel Castro's government. On May 8, the public interest group Judicial Watch called for the MCI boycott, saying Glover lent tacit support to Castro's brutal crackdowns on dissidents when he signed that document.

Judicial Watch president Tom Fitton said the boycott was not about Glover's right to free speech.

"People who are against murder and torture are repulsed by his support, and MCI is slow on the uptake."

Glover replied: "This is much larger than me. It's larger than my comments, and my signing a letter supporting Cuba's right to self-determination. People can take that in whatever way they can."