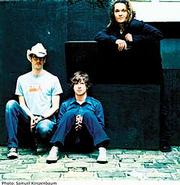 More specifically, it was the song "Popular."

The hit single, which featured spoken lyrics culled from an Eisenhower-era dating manual, had just the right mix of irony, angst and catchiness to become an MTV staple during 1996. But it also painted the Brooklyn-based trio as something of a one-hit wonder -- and, in many people's minds, a one-trick pony.

Now, after years of record label battles and general obscurity, Nada Surf has just released "Let Go," a 12-track gem that is garnering the band significant praise from both the mainstream and underground press. (Entertainment Weekly says the album delivers "a dozen near-perfect pop songs, each one teeming with joyful desperation.")

It's a sophisticated offering from a band once commercially shackled to a novelty tune.

"What it did, of course, is set up wrong expectations," says singer/guitarist Matthew Caws of the "Popular" experience.

"It landed us on a label (Elektra) where we didn't belong, where we thought we were being courted for what we do -- which is write a bunch of songs. But really we were being courted for ONE song. We couldn't really see at the time how simple it was: 'Dollar signs on that one. Don't really like what else you do. So once that one is done, either you write another one or goodbye.'"

That goodbye became a permanent reality when Elektra dropped the band in 1998 and decided not to release its second record, "The Proximity Effect." The label eventually abrogated the stance two years later and allowed the act to put out the album on its own ... to little fanfare.

"But the silver lining is that the way things got so rocky and complicated let us go home," Caws says. "I spent a couple years working at a local record store. That was a pretty good place to write a record from, because that's real life.

"Being in a band is not really like real life. You're paid for what you love to do -- that's weird. You get applause every night -- that's just not normal. And also you're not at home, therefore you don't have any normal relationships. The whole thing is kind of wacky."

A decade and counting
Equally wacky is that for as much turmoil as the ensemble has faced over the course of a 10-year run, it's managed to maintain the same membership of Caws, bassist Daniel Lorca and drummer Ira Elliot.

"We've learned to respect each other and give each other a lot of room, which is why we've stayed together so long," says Caws, phoning from his home in Brooklyn prior to embarking on a three-week tour of the U.S. and Canada. "You kind of figure out what everyone's role is and what everyone's most classic character trait is. Then you learn to expect it, accommodate it and enjoy it, rather than be annoyed by it."

So what trait defines Caws?

"I'm tough to read," the 35-year-old musician replies. "Because I'm really happy-go-lucky, then sometimes I get a little irritated."

That tough-to-read description applies to "Let Go" as well.

The group's latest album effortlessly moves from desolate ballads such as the opener "Blizzard of '77," to the Coldplay-esque aria "Inside of Love," to the disco-meets-acid jam audacity of the first single "Hi-Speed Soul." While the diversity and maturity of the record are not the type of virtues impersonal corporations such as Elektra ordinarily look for, Nada Surf has cultivated a loyal worldwide following that appreciates this.

"Our fans are a little indie rock, a little mainstream," Caws says, analyzing his core audience. "It's people who like mainstream music but who make their own decisions. Then there is the straight-up indie rock fan who liked us from the beginning. Then there's the classic indie rock fan who didn't like us because it wasn't cool to, but for some reason we're OK now -- like it's been so long that we've been excused."

He adds, "Actually, I'm very confused by our fanbase, because sometimes it doesn't make sense. Like there are some (times) in Europe where I'll meet somebody and their two favorite bands are us and Metallica."

Good humor
One musical comparison the band might actually concur with is that it sounds like Kansas-based group Vitreous Humor. At least one of its songs does.

Nada Surf followed up "Popular" with the single "Why Are You So Mean To Me?" The tune was originally written by the since-disbanded quartet from the Lawrence/Topeka area.

Ex-Vitreous Humor founder and current solo artist Danny Pound recently told lawrence.com that he made enough money to buy a used car after Nada Surf's label purchased the rights to the song.

Unfortunately, for Caws the collaboration wasn't as commercially or artistically lucrative.

"That was the beginning of the very end over at the EEE-lektra record conglomerate," remembers Caws.

After the band was told by an A&R executive that "The Proximity Effect" had no tracks that were radio worthy, the company suit went hunting for the next "Popular."

"He'd been implying to me that I needed to go write some hits," Caws recalls. "But for some reason he wouldn't say that to me. So we ended up speaking in metaphor. I was like, 'Please don't use that word (hits).'"

"He gave me this tape of 'Why Are You So Mean to Me?' marked with two big ears on it that said, 'Big (Expletive) Rabbit.' I really love that song. But we recorded it under very adverse conditions. I think our version has some pizzazz to it. But I don't think it's as good as the real thing at all." 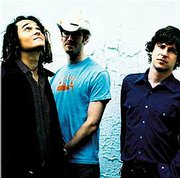 Coincidentally, Caws was introduced to Pound when the Kansas native briefly relocated to Brooklyn.

"I really loved meeting him," Caws says. "It's funny that we had that in our past."

The past does have a way of cropping back up when one least expects it.

For instance, after years of avoiding its signature anthem, Nada Surf has returned to performing "Popular" in concert. As expected, the song continues to elicit strong reactions.

"For some reason when we play it in France they go kind of ballistic," Caws says. "In the U.K. it's kind of a laugh. It's not my favorite song in the set, but I am trying to be fair and conscious of the fact there will be a few kids in the audience who want to hear it.

"Why should we be too cool for school and not play it?"