The perfect setting for a murder mystery

By By Elizabeth A. Kennedy, Associated Press Writer

Ridgewood, N.J. — When Harlan Coben looks around his hometown, with its sprawling soccer fields and perfect lawns, he sees more than just another New Jersey suburb.

He sees the perfect setting for a murder mystery. 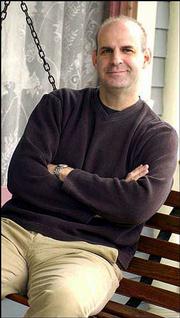 Writer Harlan Coben poses at his home in Ridgewood, N.J. Coben has used New Jersey towns, including Glen Rock, Montclair and Livingston, as settings in his 10 novels, which deal with ordinary people who are thrust into dangerous, cryptic situations.

"I love the suburbs," said Coben, 41, during an interview in his pink and gray Victorian house, where he lives with his wife and four children. "Underneath that surface, there's always something cool going on."

Coben has used New Jersey towns such as Glen Rock, Montclair and Livingston as settings in his 10 novels, which deal with ordinary people who are thrust into dangerous, cryptic situations.

His latest novel, "No Second Chance," follows Marc Seidman, a plastic surgeon from Ridgewood who is shot and left for dead as he eats a granola bar in his kitchen. When Marc awakens, he learns his wife was killed and his 6-month-old daughter, Tara, is missing.

A ransom note warning that there will be "no second chance" arrives soon after, leading Seidman on a chase for an elusive culprit using the tools available to every suburban dad -- a Palm Pilot and a computer.

"I deal in real people and everyday life, people who are trying to do good but bad still seems to find them," Coben said. "I don't write books about a serial killer who slaughters the world. I don't write about one of these giant conspiracies that have reached the president."

Coben's tales of suburban intrigue, however Jersey-centric, seem to be resonating with an increasingly larger audience. His last two books, "Tell No One" and "Gone for Good," hit The New York Times best seller list.

And "No Second Chance" has been picked as the first recommendation of the International Book-of-the-Month Club, which has an estimated reach of 28 million members worldwide.

Kevin Goldman, a spokesman for Bookspan, which owns and operates the book club, said editors were looking for a book that would cross "cultural and country lines," and send readers on a joyride.

Goldman cited the subject matter of "No Second Chance" -- a father searching for his lost child -- as the perfect candidate. "There's nothing fake about the book; it rings true," he said.

"No Second Chance," like other Coben books, is a page-turner that opens with a kick: "When the first bullet hit my chest, I thought of my daughter," is the first line.

There are too many twists and turns to name, and the book has a likable, self-effacing narrator. (Seidman says he got into plastic surgery for victims not so much to help the disadvantaged, but because "that is where the cool cases lie.")

Coben said his books are set in New Jersey because it's the only place he really knows. Born in Newark and raised in Livingston, he left the Garden State only to attend Amherst College in Massachusetts, where he met his wife, Anne, a pediatrician.

The couple returned to New Jersey to start their own family: Charlotte, 9, Benjamin, 5, Will, 4, and Eve, 1.

"None have jobs," the author quipped. "They all live at home."

That much is obvious from the evidence of family life that fill his home, including finger paintings hanging on the walls and pairs of little sneakers in the doorway. This setting, he says, helps inspire the books.

"It's taking what we've all known and we've all experienced and pulling the thread until I find that awful thing at the end of it," Coben said. "I love the everyman in extraordinary circumstances."

Coben adds that his own life -- which he describes as a series of "pinch-me moments" -- is in many ways an extraordinary circumstance, too.

"Writers always say, 'Oh I always knew I wanted to be a writer. When I was a 3-month-old fetus, a pen formed in my hand,"' he said. Coben came to writing a bit later, after working for a travel company that sent Americans on trips to Italy and Spain.

"I used to set up the trips and write the brochure," he said. "I think it made me realize that I'm not really meant to work."

He started his professional writing career in 1995, when he published "Deal Breaker," the first of seven books featuring Myron Bolitar, a sports agent and occasional sleuth. But he found a broader audience since then, most notably with "Tell No One," which was optioned by Columbia Pictures, Coben said.

Coben declined to work on a screenplay for the movie version of the book, about a man trying to find the real story behind his wife's murder.

"You're never going to like what they do," he explained. "If a novelist got a report card, it would say, 'Does not play well with others.' And Hollywood is all about playing with others. ... I like to write novels, and I have no interest in writing movies."

Coben's writing process is fairly straightforward: He wakes up when his kids do, drops them off "wherever they need to go," and buckles down at a local coffee shop or library.

"I like white noise -- it makes me concentrate harder," he said. "So I like there to be people around."

By 3 p.m., he returns home and lives the life of a normal suburban dad -- with some decidedly cosmopolitan perks. A picture in his study of the Statue of Liberty was taken from a yacht owned by Steve Forbes, who invited the family for a ride after reading Coben's books.

Then there's a letter from Senate minority leader Tom Daschle, another fan. "If I can make Steve Forbes and Tom Daschle agree on something," Coben said, "then I've got something going on."