Supporters of Bruce, the foul-mouthed comic convicted of obscenity charges in 1964, have launched a campaign to win him a legal reprieve -- 37 years after his death. 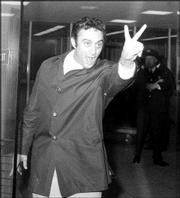 Comedian Lenny Bruce flashes a peace sign as he leaves the U.S. customs office after returning to New York's Idlewild Airport in this April 8, 1963, file photo. Supporters of the foul-mouthed Bruce, who was convicted of obscenity charges in 1964 in New York, launched a campaign Tuesday to have the comic pardoned.

The goal is to "correct a grave injustice -- the prosecution and persecution of comedian Lenny Bruce for nothing more than speaking his mind," said Ron Collins, co-author of "The Trials of Lenny Bruce: The Fall and Rise of an American Icon."

The movement to win Bruce a pardon boasts an impressive roster of backers, from 25 First Amendment lawyers (including Floyd Abrams) to 10 artists and writers (including Robin Williams, the Smothers Brothers and Penn and Teller).

"A pardon now is too late to save Lenny Bruce," read the artists' letter to Gov. George Pataki. "But a posthumous pardon would set the record straight and thereby demonstrate New York's commitment to freedom -- free speech, free press, free thinking."

While Bruce was considered a pariah by some in the '60s, he's generally viewed now as a groundbreaking performer who totally changed the stand-up comedy business.

During a November 1964 performance at Cafe Au Go Go in Greenwich Village, Bruce used more than 100 "obscene" words -- most of the four-letter variety, although one contained a dozen letters. Undercover police detectives attended the show, and later testified against Bruce.

"The cops did the act for the grand jury and it stunk, and I got busted," Bruce observed wryly at the time. He was convicted after a six-month trial.

Bruce mishandled his own appeal, and died of a drug overdose in August 1966 with the conviction still on the books. He was 39.

Club owner Howard Solomon was convicted along with Bruce -- although his conviction was eventually reversed.