Sony announced the "PSX" today, a console which they are filing under Sony and not Sony Computer Entertainment. This is not the Playstation 3 as rumors would tell. 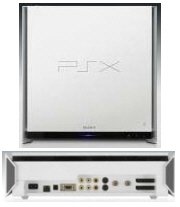 This console is a hybrid of a TV tuner/recorder, DVD player/recorder and a PS2 with a built-in ethernet adapter, 120 GB hard drive, memory stick support and USB 2.0 support. Do not confuse the PSX name with the common acronym for the original Playstation. This new breed of machine Sony promises to bring all realms of entertainment together.

A price has not yet been announced, but will be released this year in Japan and next year in the US and Europe.