Doherty said Sony's rivals would be hard-pressed to come up with versions of the PSX because neither Microsoft nor Nintendo possesses Sony's consumer electronics and game resources. (An update on yes

The beefed-up PlayStation 2, called the PSX, will go on sale in Japan this year and is planned for the United States and Europe early next year, Sony executive deputy president Ken Kutaragi said. He refused to give a price.

"We want an extreme product to represent a new platform out of Sony," he told reporters at a Tokyo hotel where a prototype was shown.

The PSX was the highlight of a presentation by Sony executives outlining a new strategy to calm investors after the company last month reported a worse-than-expected loss of $945 million for the January-March quarter. 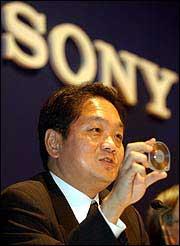 Ken Kutaragi, Sony's executive deputy president, holds a new MD disk during a press conference in Tokyo. Sony Corp. on Wednesday touted its revamped Playstation 2 videogame machine that also has a DVD recorder and TV tuner, which will be able to download movies and music using the disk.

That sent Sony's shares sharply lower in what the Japanese media dubbed "the Sony shock."

"The Sony shock was a shock for us, too," said chief executive Nobuyuki Idei. "We want to change the shock into something positive."

Sony repeatedly has promised to generate profits through futuristic gadgets that download entertainment for the network-linked home, allowing Sony to exploit both its electronics and entertainment divisions.

The video game console market is competitive, pitting the PlayStation 2 against the Xbox from Microsoft Corp. and the GameCube from Nintendo Co.

The PlayStation 2 is the No. 1 video game machine, with 52.5 million sold worldwide. Sony also plans to start selling a portable PlayStation 2 called PSP next year that is designed to rival Nintendo's popular Game Boy hand-held device.

Richard Doherty, research director at Envisioneering Group, a technology research company, praised Sony's decision to add features to the PlayStation 2 because so many people already own the console and are used to handling its controller. In a demonstration Wednesday, a user with the game controller scrolled quickly through image icons to switch from TV to digital photo files to movies and music.

"It will not pay off immediately. But it's a very good direction," Doherty said. "A lot of consumers in all geographies of the world are tired of having two or three things attached to their TV."

Doherty said Sony's rivals would be hard-pressed to come up with versions of the PSX because neither Microsoft nor Nintendo possesses Sony's consumer electronics and game resources.

The company has cut costs in the past three years, reducing plants to 52 from 70, and slashing 29,000 jobs, or 19 percent of its global work force. Through fiscal 2005, Sony will spend $2.4 billion on cost-cutting measures aimed at saving $1.4 billion a year.