There was no time to think.

Amid the smoke and chaos of an ambush in South Vietnam's Quang Tri Province in 1968, U.S. Navy medic Don "Doc" Ballard was tending to a group of wounded marines when one of them yelled, "Grenade!" Ballard saw the device land nearby and, knowing it would kill his patients if it exploded, threw himself on the grenade, holding it tight to his body.

Minutes that seemed like hours ticked by, and the grenade didn't explode. Ballard tossed it aside and returned to the wounded men.

He was told later that the grenade, which apparently had a defective fuse, exploded in mid-air.

For that moment of valor, Ballard received the prestigious Medal of Honor on May 14, 1970, from President Nixon, who told him, "The country has a lot to be thankful for having men of your caliber. I am very proud of you."

Ballard's proud, too, but he has mixed emotions about the heroic actions that led to the recognition.

"I've had problems with that mentally because who wants to admit they tried to commit suicide," he says on the phone from Kansas City, Mo., where he grew up and still lives. But he wasn't thinking about himself at the time. "It's like running out in front of a car to snatch your kid that's going to get run over. You put yourself in harm's way to protect him."

Ballard is part of an elite group. There are fewer than 135 living recipients of the Medal of Honor, America's highest military honor. Just 3,440 people of the more than 39 million men and women who have served in the U.S. military since the Civil War have received the award, which is given to soldiers who perform an act of personal bravery or self-sacrifice that involves risk of life, represents gallantry above the call of duty and is witnessed by at least two people.

Ballard's story and those of 115 other Medal of Honor recipients are featured in a November release by Artisan Books called "Medal of Honor: Portraits of Valor Beyond the Call of Duty." Ballard's tale appears on page 13, opposite a black-and-white portrait of him with two fellow corpsmen. 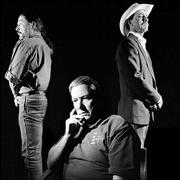 Don "Doc" Ballard, center, of Kansas City, Mo., won a Medal of Honor in 1970 for throwing himself on a grenade during the Vietnam War to spare the lives of a group of patients. The retired U.S. Navy colonel is one of 116 Medal of Honor winners featured in a new book, "Medal of Honor: Portraits of Valor Beyond the Call of Duty." He is pictured with two fellow corpsmen.

Ballard, who also received three Purple Hearts, returned from Vietnam in the fall of 1968 after being wounded.

His not-so-warm homecoming only increases his insistence on the importance of today's U.S. troops in Iraq feeling like they have the support of the American people.

"I think it's very important that they can identify that they are being appreciated," he says. "It's a bad job anyway, then to combine it with complacency and then even in Vietnam, we were perceived to be part of the problem instead of part of the solution. We tried to hide the fact that we were Vietnam vets when we came back. Nobody would hire us. They'd spit on us, label us as baby killers."

It's been a struggle to come to terms with that rejection, but, he says, "time heals most wounds."

In a way, the Medal of Honor helped validate Ballard's experience. He remembers being shocked when he learned he would receive it.

"I was totally surprised," he recalls. "Matter of fact, I didn't even believe that they were talking about me. I thought they'd made a mistake."

Ballard retired from the Kansas National Guard in 2000 as a colonel. He served 35 years active and reserve in the military.

Though he volunteered for his service, he believes the draft should be in place.

"I think everybody owes their country some indebtedness for the freedom that we enjoy," he says. "I think it's a small price for the public to pay, men and women. If they're going to be citizens, then they ought to pay the price. They don't have to actually serve in the military, but they ought to serve the country somehow, either in the draft or with the other work-related corps that are out there."

He says he would encourage all his children and grandchildren to join the service -- his son already has served in the Navy -- despite any fears he might have about their safety.

"There's always fear when you have your kids exposed to different dangers, but ... just the way that I'm driving here today, I'm passing cars at lethal speeds going the opposite direction just a foot apart," he says. "So, we're taking chances every day, of sorts, whether we're walking across the street or driving on a two-lane road. More people get killed in car accidents than we've lost in Iraq yet.

Ballard and other Medal of Honor recipients featured in the book will appear in more than 40 bookstores nationwide on Veterans Day and throughout November. Ballard, in his own quiet way, is thrilled to be included in the collection.

"I'm proud to be among that company because it's the only common denominator that we have. We have all walks of life, all creeds, colors, religions, ranks, branches of service," he says. "There's nothing in common about us except that one common deed that we were compassionate and that we feel the need to be more than what's expected."