"Thinking about money in this society is like being a fish wondering about the nature of water. We build our lives around money, we live money, we breathe money, we swim in it like fish in the sea.
Millions of people spend (so to speak) 40 hours a week, 50 weeks a year doing nothing but playing with money -- printing it, minting it, counting it, recounting it, taking it from here, sending it there, juggling it, smuggling it...sitting in offices in huge buildings making phone calls and shuffling bits of paper, adding & re-adding endless columns of numbers to make sure that they come out exactly the same...yeah, but...
What is MONEY?"
-- Boog Highberger, from "What is Money?"

Three years ago, Dennis "Boog" Highberger and his band of merry activists embarked on one of the greatest experiments in Lawrence's brief history. The idea was to print and distribute a local currency (called REAL dollars), organize a non-profit agency to oversee the project (the Lawrence Trade Organization, or LTO), convince local businesses to accept the new bills and motivate the public to trade in their Benjamin bills for Burroughs bucks (the famous local beat-poet adorns the REAL $3 bill).

In doing so, it was hoped, money would stay within the community instead of flying off to some far-off corporate headquarters, and the assets could be reinvested into preserving Lawrence's local character and protecting land from development.

The first couple of months after the program began -- in September of 2000 -- looked promising. Dozens of local businesses -- bars, grocery stores, hardware stores, liquor stores, movie theaters, hair salons and a host of specialty services -- signed up for the program and pasted red "We Accept REAL Dollars" stickers in their windows. Consumers seemed to be catching on, too, trading in their greenbacks for REAL dollars (the acronym stands for "Realizing Economic Alternatives in Lawrence") at the Community Mercantile's Free State Credit Union and the Liberty Hall box office. 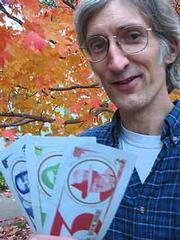 But the initial momentum soon fizzled. Two of the campaigns' main backers -- Mike Pagano and John Cougher -- moved out-of-state within a year of its conception. A glance at the LTO's bookkeeping reveals a steady drop in the amount of REAL Dollars being requested at the Merc's Free State Credit Union: $936 in Oct. 2000, $204 in Oct. 2001, $89 in Oct. 2002 and $30 this past month.

Nearly a dozen businesses interviewed for this article, and none reported receiving REAL dollars on a weekly or even monthly basis. Most could not recall the last time they received REAL Dollars; if they could, it was anywhere from a month to seven months ago.

Without active leadership (Highberger's time is monopolized by his duties as City Commissioner and attorney for the Kansas Department of Health and Environment), the infrastructure of the LTO has dissolved. As a result, REAL dollars receive little to no promotion and are on the verge of practical extinction. 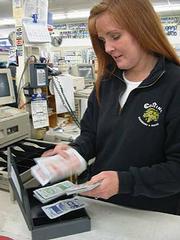 "I think we're all a little disappointed that it didn't take off better," Highberger said. "I think it had the potential to reach more people than it has."

Makin' money
Highberger, a longtime community activist who also serves on the board of the Community Mercantile, stumbled upon the idea for REAL dollars while thumbing through a book in a remote cove of the KU libraries.

"It blew my mind," Highberger said. "I think the intriguing thing about money is the closer you look at it, the less solid it is."

Though the notion of creating money might seem absurd or even illegal to many people, REAL dollars are in fact 100% legit. Federal laws prohibit making coins, but not bills. Highberger even got an opinion from the Kansas Department of Credit Unions that determined REAL dollars were "negotiable instruments" that could be handled by credit unions.

"People are curious about the idea: Is this legal? Can you really do this?" he said. "Anybody can print money: the trick is to get somebody to take it."

Highberger based REAL dollars on the Isle of Man model: Lawrence residents could trade in their U.S. dollars for REAL dollars to be used at local businesses. Ideally, the U.S. dollars (which were placed in the LTO's account at the Free State Credit Union) would accumulate enough interest to support the program and make investments in the community.

Unfortunately, the plan didn't work as well in the 21st century.

"What killed us is that interest rates fell apart," Highberger said. "The idea was that interest off the money at the Free State Credit Union was going to help pay the program's expenses, but instead of giving 8 or 9 percent interest it gave 1 percent and so we really couldn't generate any cash."

REAL problems
Even if interest rates had returned to 19th century highs, the REAL dollar campaign still would have faced a number of hurdles.

"I guess we may have been a little naive about the ability of businesses to spend these things locally," he said. "If we revitalize it what we need to do is institute some kind of a banking system (that would allow users to debit or credit their accounts)."

The campaign also had to overcome skepticism and indifference from businesses and consumers.

Footprints owner Mick Ranney, whose store has accepted REAL dollars since the program's inception, said he attributed the lack of REAL dollar usage to consumer indifference.

"It's kind of hard to motivate people to change their ways when there's no immediate benefit," Ranney said.

At Waxman candles, a stack of REAL dollars sits forsaken in a box that hasn't been opened for seven months. Owner Bob Werts said he supports the ideas behind REAL dollars but doesn't see any benefit to his business.

"The only positive I see is entering in and being a team player," Werts said. "I think the novelty's worn off and there hasn't been enough carry-through on it."

Beer bucks
Though consumer use of REAL dollars has nearly disappeared, the currency is still used frequently in a small circle of downtown businesses.

Linda Cottin, owner of Cottin's Hardware at 19th and Massachusetts St., said she frequently uses REAL dollars to buy lunch for her employees or supplies for store parties.

"It helps us make sure we keep the money in Lawrence," Cottin said.

Sarah Reel, a cashier at the store, said the REAL dollars work well as a business exchange.

One of the most popular places to spend REAL dollars when the bills first arrived was the Replay Lounge. Manager Matt Sullivan said he hadn't seen one for over a year but would still encourage people to spend them at the Replay.

"It was a little bit of a pain but it was worth it because I thought it was a good cause," Sullivan said.

The bills have also become popular gifts and collectors' items.

"You still can go buy a Free State beer with a three-dollar bill with a picture of William Burroughs on it," Highberger said. "There's entertainment value there if nothing else."

Keepin' it REAL
Even if another REAL dollar was never spent, the bills would still be redeemable for cash. Since consumers and retailers had to pay one U.S. dollar for every REAL dollar, each REAL dollar in circulation is matched by a U.S. dollar in the LTO's bank account.

"You either have to make them last forever or they crash," Highberger said. "I intend to live here for quite awhile and I didn't want them to crash and burn a lot of my friends."

To revive interest in REAL dollars, Highberger said he would need help.

"If a lot of people call me up and I can get an organization together again, there's a real potential to make it happen," he said. "We've already got the currency printed and we've already done some of the groundwork to make people familiar with the concept of local currency."

Though Highberger never realized his vision of reinvesting the programs' assets in the community, he was able to make a $1,500 donation to the Social Service League and minor contributions to other local charities. That money came out of more than $2,000 that the LTO made from sales to collectors and out-of-town giftgivers.

Highberger said the campaign was as much about making people think about where they spend their money as it was about keeping money in the local economy.

"A lot of it was more idealistic than practical," he said. "If it helped a handful of people think more about where their dollars go and encouraged them to spend it locally, then it was worthwhile."

i'd use them. but seems like now they are more of a novelty item, suited for framing or something. Boog, get this going again. Don't let the $60,000+ of REAL bucks go to waste...

ive heard of this money. htough, knew nothing about it. now i do. great concept. lets kick this into hear again. maybe find other communities that are doing it and get some advice on how they make it work...

This is the first I've heard of this! I like it a lot.