Special bonus disc to include Zelda, Zelda II: The Adventure of Link, Ocarina of Time and Majora's Mask

The rumors come to an end today as Nintendo announced its holiday GameCube Zelda bundle. 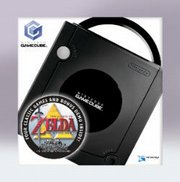 The millions of fans of The Legend of ZeldaÂ® series will get an early holiday present from Nintendo of America Inc.: the release of a must-have disc that includes four playable classic games and additional bonus materials. Starting Nov. 17, Nintendo will offer The Legend of Zelda Collector's Edition Bundle packaged with the Nintendo GameCube/¢ at the low price of just $99.99.
The disc is destined to become the surprise hit of the season, as The Legend of Zelda remains one of the video game industry's most popular franchises. Since its debut in 1987, nearly 40 million games have been sold worldwide.

"This offer is the ultimate treat for fans of The Legend of Zelda series," says George Harrison, Nintendo of America's senior vice president, marketing and corporate communications. "Just buy a Nintendo GameCube at the new low MSRP of $99.99 and you get the special The Legend of Zelda offer at no additional cost."

The special disc will include:

Fans of The Legend of Zelda who already own a Nintendo GameCube can receive the disc in one of two ways. First, fans will receive a disc by registering their Nintendo GameCube system and two of the following hot holiday titles: Mario KartÂ®: Double Dash!!/¢, Mario PartyÂ® 5, Mario & Luigi/¢: Superstar Saga and 1080Â°Â®: Avalanche at www.nintendo.com/zeldaclassic. Fans also can receive the bonus disc by subscribing to or renewing their subscription to Nintendo PowerÂ® magazine at www.nintendopower.com/zelda. This offer is available only while supplies last. To be eligible for either offer, fans also must register with My Nintendo at www.nintendo.com.