New York — Capping an extraordinary conservative furor over a movie virtually no one has seen, CBS said Tuesday it will not air "The Reagans" and shunt it off to the Showtime cable network instead.

Based on snippets of the script that had leaked out in recent weeks, conservatives, including the son of the former president, accused CBS of distorting the legacy of Ronald Reagan.

While CBS said it was not bowing to political pressure, critics said that was exactly the case, and worried about the effects of such pre-emptive strikes on future work.

CBS believed it had ordered a love story about Ronald and Nancy Reagan with politics as a backdrop, but instead got a film that crossed the line into advocacy, said a network executive who spoke on the condition of anonymity.

The film had been scheduled to air Nov. 16 and 18, in the heart of the November ratings sweeps. CBS attempted to edit the film to remove offending passages, but gave up.

"We believe it does not present a balanced portrayal of the Reagans for CBS and its audience," the network said in a statement Tuesday.

But conservatives said it was a question of accuracy.

The miniseries became a hot topic on talk radio and the TV news networks. The chairman of the Republican National Committee wrote to CBS President Leslie Moonves, asking for historians to review the movie, and the conservative Media Research Center asked advertisers to consider boycotting the film. 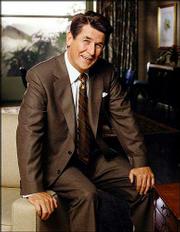 James Brolin as President Ronald Reagan poses on the set of the miniseries "The Reagans" in this undated publicity photo. CBS announced Tuesday that it would not air the four-hour movie this month, and would instead license it to sister station Showtime.

"This was a left-wing smear of one of the nation's most beloved presidents and CBS got caught," said Brent Bozell, founder of the Media Research Center.

Showtime and CBS are both owned by Viacom, which is anxiously awaiting federal action on rules to restrict ownership of local TV stations. Failure to enact such changes could cost Viacom millions of dollars, said Jeff Chester, head of the Center for Digital Democracy, a communications lobbying group.

"They made a business decision," he said. "In doing so, they clearly caved in to the political pressure."

James Brolin portrayed Reagan. He is married to outspoken liberal Barbra Streisand, which drew complaints from some conservatives.

In a portion of the script published last month, Reagan was depicted as uncaring and judgmental toward people with AIDS. "They that live in sin shall die in sin," Reagan's character tells his wife as she begs him to help AIDS victims.

Supporters of the former president, who has Alzheimer's disease, said there's no evidence he said that.

There was also a concern about its depiction of Nancy Reagan. The former president's son, radio talk show host Michael Reagan, said he had seen eight minutes of highlights and Nancy Reagan was depicted as basically running the White House.

"I said to Nancy, they don't like dad, but they hate you," Reagan said Tuesday on ABC's "Good Morning America."