We've got our hands on it early...how does it fare so far? 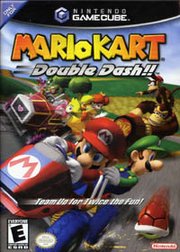 We got our final copy of Mario Kart: Double Dash in yesterday and I now see what all the magazines have been clamoring about. This is incredibly fun.

I was fairly apprehensive at the sense of speed all the critics were cautious about at E3. Nintendo promised to speed it up and I must say, even after playing F-Zero GX to death, the lowest speed class in MK:DD can still give a little rush. Once I learned how to drift for a speed boost I breezed through the three main cups at 50cc. I believe it's only after you beat the 150cc class all the way through that you unlock the fourth cup. But we'll see.

Battling through the races feels more intense than the previous Mario Kart on the N64. I was quite impressed. The tracks are designed more for battle than speed racing which is fitting for a Mario Kart game.

The multiplayer games at the start are a keep-away type game with a star which you try to hold for 55 seconds. Then there is the regular battle mode where you get hit three times and you're out. Finally there is a b-bomb match where all weapons are bombs and you have to get four points to win, but when you get hit, you lose a point. All three modes are fun but my first impression of the multiplayer stages is pretty average, if not slightly disappointing. I loved the multi-tiered platforms in MK64, but all we really get at the start is that one of the four levels has two simple bridging platforms. Hopefully there is more to unlock.

Overall, though, the game is killer. The racing is so much fun, especially with my roommates. I'll have the full review closer to its release on Nov 17.