Not the revolution you hoped for, but it's a ton of customizable fun

Okay I'm confused. I think Neversoft figured that if it packs the "revolutionary" Tony Hawk Underground with tons of exciting peripheral features, we wouldn't notice that in its true form it's just Tony Hawk 5. 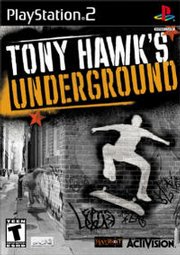 Tony Hawk Underground's marketing prides the game on being more free-roaming, allowing the player to get off the skateboard, climb up stuff and run around to complete missions. It furthers this idea by having some specific missions only available to complete on foot. There's usually no justification why you must be on foot, since you can reach almost everything on your board. There is a story-type mode and more dialogue added to the beginning of each objective to add to the "revolutionary" veil.

That being said, THUG is still a lot of fun with great additions since the last outing.

The Tony Hawk series, if you've been held hostage out of country for years, is a skateboarding game with a keen sense of punk style with exaggerated tricks you will never see on the X-games. With each new edition, the gameplay and amount of things you can do increase and get more refined.

Gone are the days of bad transfers, letting yourself plow face first into the ground when you slightly miss a landing. You can now level off your jump at any time by pressing a certain two buttons simultaneously. This allows you to land more tricks than you could before, but is welcomed since there was never a way to recover from some tricks in TH4.

Create-a-park received a facelift as well. The park can be bigger and you can connect so many things to make some outrageous rail tracks. You can also create your own objectives. There is so much depth to the customization of THUG.

In the PS2 release, you can upload a picture of your face online and download it to your PS2 via a broadband adapter and literally put your face model on your skater. This gets around the shallow face modeling just available to Xbox and Gamecube owners.

There are tons of multiplayer games as well. The most fun is to be had in Capture the Flag which is only available online with the PS2. This is a big bummer for Xbox Live owners and not any surprise to Gamecube fans.

The main drawback is that the game plays exactly the same when you boil it down. Add in wonky on-foot controls and it really feels more like an expansion pack than a sequel. Not to say that it isn't fun, but many will be completely satisfied continuing to play Tony Hawk 4.

The graphics are pretty solid and standard. Nothing is created to wow you. Nothing will. The Xbox and Gamecube version do look noticeably better than the PS2 incarnation, especially when the Xbox runs in HDTV 720p widescreen. The sound department has taken a nice step up with cleaner, fresher samples of faces hitting the ground and other crashes. Add in a killer soundtrack with Jane's Addiction, Social Distortion, among tons, and I mean tons, of other AAA bands and you've got killer tunes.

Tony Hawk Underground is fun. But the appeal this year might be more for those that are deep into customization. If you just like to power on and skate, Tony Hawk 4 is only $20 if you don't already own it.