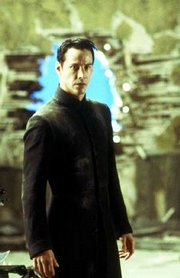 Because mathematical perfection is crucial to the whole foundation of the "Matrix" franchise, here are a few equations to consider:

As much of a drop-off in quality as last May's release of "The Matrix Reloaded" was in comparison to the original film, that is how much the new "The Matrix Revolutions" pales next to "Reloaded."

Based on this declining ratio, if a fourth "Matrix" someday materializes then it could statistically be the worst movie ever made.

"Revolutions" is a boring, ponderous, joyless exercise in filmmaking. The convoluted plot progresses like it's being made up on the spot. New characters of borderline necessity (Trainman, Sati, etc.) are introduced and dismissed at random. The much-anticipated action scenes -- though noisy and strange -- are never engaging.

This all builds to the trilogy's conclusion where the eventual outcome is decided so arbitrarily that a viewer's only reaction will be to ask, "That's it?" (I defy anyone to explain how the main villain is thwarted or why the machines make the momentous decision they do. Don't even bring up the meaning of the epilogue.)

It's too bad, because 1999's original "Matrix" holds up about as well as any sci-fi/action movie around. Although its bullet-time effects have been copied ad infinitum, the ingenuity and momentum of this predecessor have yet to be equaled. It's one pop-culture blockbuster that thoroughly deserves such adoration.

From the looks of their latest effort, writer/directors Andy and Larry Wachowski will never be able to top "The Matrix." They certainly know how to create an intriguing cinematic world from scratch. But they haven't proved capable of building upon the foundation in order to keep the environment interesting.

The Wachowski team is on a fast track to eclipse George Lucas for the title of Most Promising Filmmaker Who is Now a Complacent Hack.

It's traditional to give some kind of plot synopsis when reviewing a film, but with "Revolutions" the story is so impenetrable that there is little point. Let's just say it begins with Neo (Keanu Reeves) at a train platform where he is "trapped in a place between this world and the machine world."

Nothing jump starts an action movie like a man waiting around in a subway station.

This compulsory finale to the "Matrix" trilogy is neither intellectually challenging (which the first movie is) nor kinetically captivating (a la the second). "Revolutions" is a boring, joyless exercise in post-MTV filmmaking, made even worse by a plot that is impenetrable. It's like playing a video game in which the rules aren't explained.<!--The machine army continues to drill towards Zion. Within hours, they will overrun the population of the Zionites and lay extinction to human kind. Meanwhile, Neo is held captive by the Merovingian at a train station. Trinity & Morpheus set out on a journey to release him from a mysterious train operator. Also, Smith resumes his quest to kill "Mr. Anderson" as he reveals his identity into the real world and resumes to replicate his program inside the system of The Matrix, causing it to decay. All hope is placed in the freed Neo, who must travel to the city of the machines in the Logos ship with Trinity and bargain to save each kingdom from destruction by finishing Smith once and for all. But even with his new powers over the sentinels, will he be able to fight them off?-->

From there it's a fractured race among the various human survivors to protect their underground city from invasion by the robotic rulers of the surface. This results in numerous battles that take on the dynamics of a video game. One extended sequence between humans caged in mechanical armor firing at swooping "calamari" drones feels no different than playing a 15-minute round of Centipede.

Oddly enough, the majority of the film takes place outside of the Matrix. Look to this decision for why the movie is such a dud.

Within the alternate-reality expanse of the Matrix, the characters have super powers, they bend the laws of physics and the whole look of the place takes on a hyperstylized sheen. In the cavernous tunnels of the tangible world, the colors are desaturated to the brink of dreary. The futuristic refugee camp setting known as Zion is simply depressing. With options like these, there is little motivation for Neo to ever leave the confines of his digital world.

It doesn't help the picture that the large array of actors are coached to deliver their lines in one of three ways: angry, elusive or perplexed. Similar to the last two "Star Wars" epics, whether the actors are A-list or D-list is irrelevant; they're all directed so poorly that there is no persuasiveness in their performances.

Reeves looks particularly bored with the material, as if he can't wait to fulfill his contractual obligation. (Perhaps the reason he wears dark sunglasses throughout the flick is because it hides all the times he's rolling his eyes at the cryptic dialogue.) The star has never been one of the great "emoters," yet when he is forced to cry in one farewell scene it's just plain embarrassing.

No one will argue that a tremendous amount of conceptual design and special effects-related talent went into crafting this film. This is a $110 million blockbuster, and every cent can be seen up on the screen. Some of the visuals do generate substantial power, such as the reverberating images of stone-faced Agent Smith (Hugo Weaving), who has cloned himself into an army populous enough to fill an entire city.

But to what end?

The final product is neither intellectually challenging (which the first movie is) nor kinetically captivating (a la the second). "The Matrix Revolutions" is confusing and ultimately inessential.

Playing a video game isn't much fun when the rules are never explained.