True Crime is a game wide in scope considering the free-roaming L.A. backdrop, but fails do deliver in key areas of control.

True Crime is an ambitious project. The game takes a real scan of L.A. and re-creates the city with a high rate of accuracy. This is to be commended. If you are unfamiliar with L.A., however, most of the city will look pretty sterile outside of the expected stadiums and other L.A.-based set pieces. 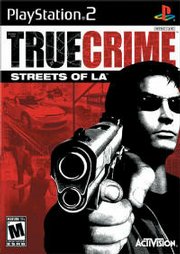 You are Nick Kang, a renegade cop out to solve the crimes of the triad. Same old story so we need a compelling sub-plot, right? Well, not here. Despite the narration of Christopher Walken, there is nothing really to hold onto from the games presentation, unless of course you unlock Snoop Dogg later on.

What's troubling is that your character is so arrogant to the point of being truly unlikable. He's not fun and his one-liners rip off so many movies in an embarrassing fashion. Add this to the fact that the game tries too hard to be "mature" that it ironically comes off as completely immature.

You are given very short missions to complete by driving to the green spot on a map in a linear fashion. All the while a random crime generator creates crimes represented by a red indicator on your radar. You can go solve those crimes if you choose to build up attributes and money in lieu of the actual missions. And of course if you are bored and want to be a bad cop, you can go around town killing random people.

Activision boasts three modes of gameplay in True Crime. Fighting, driving and gunplay. They assure gamers a "true" experience of all three. From your first encounter with the shooting range, car and fighting with a thug, nothing seems to control particularly well and even several missions into the game the controls on all three modes of play continue to be inconsistent and uncomfortable.

Shooting happens to be the worst of the three modes. You can move your cursor in the general direction of the enemy you want to lock onto. From there it is a battle of trigger mashing faster than your digital opponent while diving and using the bullet time mode. There is no skill to be had in aiming unless you hold the trigger button, moving into manual aim mode which takes too long to use in firefights. What's annoying is that your fire button is the same button for moving into manual aim mode. You will find yourself pumping the trigger to obliterate your enemy and then all of the sudden you are in a slow manual aim mode. You rush to try to get back to the paltry auto-aim mode, but by that time much of your life is gone at the fault of the gameplay mechanics.

Also, for being a "true" experience, it sure takes many, many bullets to bring down a normal crook.

Driving around town is likened to Crazy Taxi, with most cars seeming very tail-heavy. There are some bonus missions that you must win a race to get car upgrades, but the driving mechanics limit you from being that competitive early on. It's unpolished and unbalanced.

Fighting is the better of the three, being able to punch, kick, roundhouse and grapple, learning new techniques along the way. The fixed camera can prove to be a problem in many fights and the action can seem slow, but on the whole this is the most fun of the three modes.

The game makes no bones about its "M" rating with tons of blood and swearing, but like I said, the content is pretty laughable even if it was to be patterned after a B-movie.

Grand Theft Auto: Vice City it is not. True Crime is an average time running around wreaking random havoc, burdened by bad controls that could've made it a B game with more polish, but just can't quite find its way out of average pitfalls.