Review: The Lord of the Rings: Return of the King - PS2, Xbox, Gamecube

From the loud swells of the orchestra and the tons of in-game speech triggered by events, this is one of the best movie-to-game translations I have ever played.

EA returns with its second attempt at a Lord of the Rings game with more, more, more...and that's a good thing. 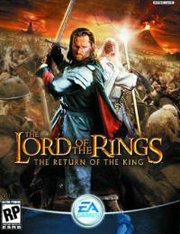 Imagine being thrown into the pool unexpectedly at a party. Much is the same way you'll feel starting up Lord of the Rings: Return of the King. You start immediately as Gandalf at the end of the battle for Helm's Deep. Using simple combos, parries and kills, you climb up the ladder to meet Gimli and Legolas on top of the wall. While subtly being trained in the basic moves of the game, you interact with catapults to prevent the Uruk-Hai from entering the fortress via the bridge.

After a few minutes the scene ends to narration by Ian McKellan (Gandalf) advancing the story. (That story consists of a little from Two Towers and the rest from Return of the King.) You may choose your combo upgrades depending on how well you did and then choose one of three paths from the main menu.

New to the series this year is choosing the path of the Hobbit (Sam, then Frodo), Wizard or King (with Aragorn, Gimli or Legolas immediately selectable). All paths lead to the same end but each path has levels specific to its characters. Later on there are several new characters to unlock as well. And with the PS2, you can play online!

From the get-go, it's obvious that much more care was taken to make the presentation more enveloping, the backgrounds more interesting and interactive, the anticipation more swelling and the sounds more inspiring. From the loud swells of the orchestra and the tons of in-game speech triggered by events, this is one of the best movie-to-game translations I have ever played. You also get footage from the upcoming movie interspersed throughout the game.

The action is likened still to the Golden Axe arcade style hack and slash rush, pushed forward by a combo system learned and earned. As you level-up from experience, more combos are available for you to purchase. This seems to be a two-edged sword for ROTK. On one hand, the new combos are very powerful. On the other, you are usually surrounded by several Orcs and Uruk-Hai so getting the whole combo off perfectly provides a distinct, if impossible, challenge.

Some levels are extremely interactive whereas others are purely linear, if uninspired a bit. Every now and then you will encounter difficult situations that can only be described as cheap AI, but on the whole the challenges are learnable.

Unlike Two Towers, you can play cooperatively with a friend using one screen. The graphics seem to be less detailed and the frame rate seems to destabilize a bit, but it doesn't detract from the overall fun.

Speaking of graphics, everything received a big upgrade this year. The Xbox and Gamecube versions look noticeably sharper and more vibrant, also sporting a solid frame rate unlike the sometimes-jumpy PS2 version.

The sound is booming and wonderful. So much is going on and yet all the sounds are represented in full, glorious surround. This is a title you will want to play loud.

The Lord of the Rings: Return of the King will last you over ten hours the first time through, but you will feel compelled to max out the experience levels off all the characters, going through previously played levels and ones you may have skipped. EA is getting this hack and slash formula down well.