Fifty years ago, playwright Arthur Miller detected in the madness of McCarthy era anti-Communism a link to the crazed witch hunts of 17th-century Salem.

He crafted a drama about the accusations, trials and mania in 1952 and called it "The Crucible." The tale of the destructive power of socially sanctioned violence brought about by paranoia was intended as an allegory about the House Un-American Activities Committee's anti-Communist hearings.

Not surprisingly, the play and its operatic version have been cropping up on theater marquees across the country since shortly after the terrorist attacks of Sept. 11, 2001.

Liam Neeson and cast brought a successful revival to Broadway in March 2002, and regional theater and opera companies continue to perform the work as a creative reaction to what many feel is a new wave of McCarthyism.

The Kansas University Opera will join the ranks Saturday when it opens Robert Ward's operatic adaptation of "The Crucible."

"Because we're under this terrorist threat -- and I'm not belittling that because terrorists are as real, maybe more real, than witches -- but it's the same thing, really. It's this sort of paranoia," says Mark Ferrell, KU Opera director. "(Attorney General John) Ashcroft started this thing where you're supposed to report on your neighbors and all that kind of crap. Well that's exactly what this (the witch trials) was.

"These people in this town -- and we know this now, historically -- they saw this as an opportunity. If you declared somebody a witch, they were hauled off to court and could be, and in fact were, hanged for it or put in jail; for long periods of time and tortured."

When truth is an afterthought

Although we are, perhaps, a bit more sophisticated today in how we tattle on people, Ferrell says, similar scenarios have occurred in the post-9/11 era. 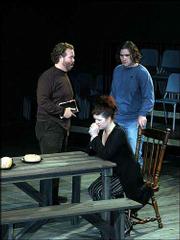 From left, Stanford Felix as the Rev. Hale, David Lara as John Proctor and Lindsey Poling as Elizabeth Proctor, rehearse a scene from the operatic version of Arthur Miller's "The Crucible." Kansas University Opera will stage the show in the Black Box Theatre beginning Saturday.

Florida authorities in September of 2002 detained three Muslim medical students for 17 hours after a woman claimed she overheard them discussing a terrorist plot in a restaurant.

Despite what Ferrell and the cast see as overwhelming parallels between the subject of "The Crucible" and today's political and social atmosphere, they resisted modernizing Bernard Stambler's libretto.

"It's one idea that briefly crossed our minds," Ferrell says. "It's not hard to imagine. The chief judge in the play is essentially John Ashcroft.

"But we're not doing anything heavy-handed. We're presenting it just as it is. ... So all these allegories, the relationship between then and now, is left up to the audience to decide. But it does not take a big leap of faith to figure it out."

"The Crucible," a parable of good and evil based on real historical events, unfolds in the town of Salem, Mass., which sinks into hysteria when Abigail, the minister's niece, accuses a slave, Tituba, of practicing witchcraft. A wave of accusations by several other girls follows, and the ensuing trial pits truth and innocence against adversity, even death.

The play premiered in 1961 and won both the Pulitzer Prize and the New York Critics Circle Citation the following year. It's one of the few contemporary American operas to have entered the standard repertory.

A cast of 21 will perform the opera at KU under guest director Tim Ocel, who directs plays and operas across the country and is concurrently staging "The Elixir of Love" at the Lyric Opera of Kansas City.

For those who have seen and liked the play and who also like music, the operatic version should be enjoyable, Ferrell says.

"The effect of the music is to really heighten the drama of a piece that's already fairly dramatic," he says. "It's very well-written in terms of the arc of the piece. It uses a lot of melodies that sound American or sound folk-like or hymn-like, which of course just reinforces the setting of the play and adds to an authenticity about the sound."

And in addition to its entertainment value, he says, the show also contains some hard lessons.

"If anything else, a play like this shows how little we've changed," he says. "This is a historical event that happened in 1692, and we have exactly the same issues in 2003. The opera and play are enormously relevant to the past 24 hours of our history."