By By Sorcha Hyland-Sidener / special to lawrence.com 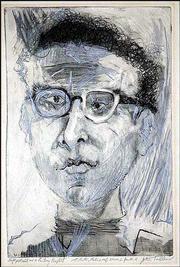 This self-portrait by the late artist John Talleur will be part of "Teaching from Prints: The Legacy of John Talleur." The exhibition honoring the former Kansas University faculty member opens Saturday and runs through Jan. 18 at the Spencer Museum of Art.

Memory and its preservation are at the heart of a new exhibition opening this weekend at Kansas University's Spencer Art Museum.

"Teaching from Prints: The Legacy of John Talleur" honors the artist and former KU professor just two years after his death.

The exhibition will feature 180 pieces, including 30 of Talleur's works. It also includes rare pieces from as early as the 15th century. The collection is from the bequest made to the museum made Talleur and his daughter, Ann.

Talleur (1925-2001) was born in Chicago in 1925. He studied at the Art
Institute of Chicago, and later under Mauricio Lasansky, one of the most
accomplished printmakers and teachers in Argentina.

It was with some degree of trepidation that Talleur accepted a teaching job in a small college town in Kansas. He had no idea where Lawrence was when he was called for interview, according to his daughter, Ann Talleur.

"He told me that he had to look it up on a map. He arrived by train and was met at the station by a KU professor dressed in a cowboy hat and boots," Ann Talleur said. "This was his first impression of the place."

When John Talleur began teaching at KU in 1953, printmaking wasn't even on the curriculum, nor were there any printmaking tools. During the 40 years he taught at the college, Talleur built its first studio, acquired a total of seven printing presses and developed the extensive printmaking program that continues today.

But perhaps his greatest gift to his students was access to his private collection of prints. His first purchase was a Pablo Picasso that he bought in 1952 as gift for a girlfriend. (When he realized she didn't like it, he
took it back and ended the relationship).

Talleur kept many of these prints on display at his home, eventually filling every free inch of wall space available. Talleur intermingled his own handiwork: woodcuts, engravings, etchings and hand-made books. Three large woodcuts from his work, "The Flight Triptych," still hang in the living room next to a 19th-century etching by Charles Meryon.

Nearby hangs a drawing by Talleur's 3-year-old granddaughter. Turn the corner to the kitchen wall and you'll find a Pierre Bonnard and another Talleur, titled "Fairies in the bottom of my Garden."

The house became a kind of old-fashioned hedge school for Talleur's family and friends. He regularly invited his more dedicated students to peruse his collection or practice making prints in his basement studio.

Dan Kirchhefer, professor of life drawing and printmaking at Emporia State University, has vivid memories of walking in Talleur's front door for the first time and seeing a James Ensor print in the hallway. 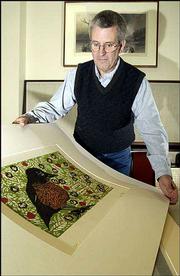 Steve Goddard, curator of prints and drawings at the Spencer Museum of Art, handles one of John Talleur's prints from the artist's 1976 portfolio. The museum will honor Talleur, a former Kansas University faculty member, with an exhibit of 500 years of print history.

"I couldn't believe it," Kirchhefer said. "I thought if this is the way John Talleur starts off his collection what more wonders can I expect? It was overwhelming but at the same time it was wonderful because he was so willing to share them.

"I never once knew John to brag. He felt that others could take advantage of them, learn from them, come to love them and appreciate them as he did. It will be hard when (the exhibit) opens here to see them out of context -- but certainly it will be a continuation of what he always wanted. And that was for people to get to see these works."

Elizabeth Broun was another frequent visitor at the Talleur household. She came to KU as a part-time print and drawing curator at the Spencer following the abrupt departure of her predecessor.

Broun admits she felt uncomfortable about taking on the role. Though highly qualified academically, printmaking was not yet her forte. John Talleur became her catalyst.

"He could have been dismissive of someone taking the position so ill prepared," said Broun. "Instead he took me under his wing to educate me. At the time I thought it was only good fun but realized later the importance of it all. John Talleur was a pearl above price and taught me to become a respectably knowledgeable print curator."

Broun took on this role in a full-time capacity shortly afterwards and worked at the Spencer for seven years. Broun is now the director of the Smithsonian American Art Museum in Washington, D.C.

The exhibition runs from Saturday through Jan. 18 in the Spencer's Kress Gallery.